포장마차
Next to Daegu Station 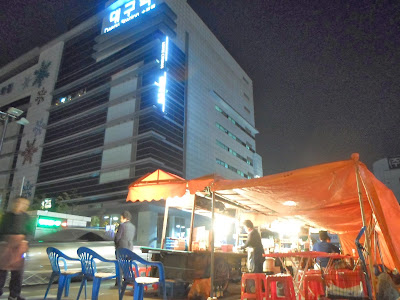 Imagine the opening theme of Cheers, except the lyrics are in Korean.  The characters are Korean too, and they're clinking glasses of Soju instead of wine or beer.  If Gunbae were a sitcom it would surely be set in a Pojangmacha.  Literally "covered wagons" (포장마차), they are more than just a friendly setting with affordable foods; they are cultural icons, home of Korea's drinking traditions.

"I've been here more than 30 years, before that department store," one of the vendors told us, pointing to the Daegu Station complex towering above.  That's also decades before E-marts and Homepluses and online grocery shopping.  A testament to their lasting appeal, her flimsy red tarps have withstood these forces of modernity.  They've also withstood the rise of fancy restaurant chains that imitate the Pojangmacha in name and decor, but not much else.

If the competition wasn't enough, some of these tents also have to contend with government regulations.  They seem trapped in a law-enforcement limbo, technically illegal but leniently enforced, a similar status as the brothels nearby. 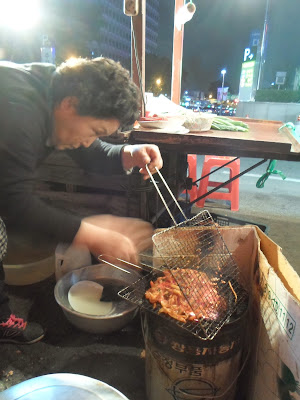 So what's their crime?  They stand accused of being eyesores, unsanitary and illegal (the tents), according to officials who decline to give their names in interviews.  I don't blame them; who would want to be known as spoiler of such a beloved tradition, Commissioner of Buzzkills, constantly being followed by an angry mob of bottle-chucking ajusshis.

But really, an eyesore?  Have they looked at the side of an E-mart recently, those behemoth blocks of sun-dried manure?  A Pojangmacha is dainty by comparison, taking up 1/50th of the space with 99% less of the soul-sucking consumerism.

Unsanitary?  My ass!  I've been frequenting street vendors for the past five years and still live to tell the tale.  Believe it or not, the only time I've been food poisoned in Korea was from pancakes at a western restaurant, a well-known one that shall remain nameless.

Illegal?  Sounds like a circulus in probando if I've ever heard one. 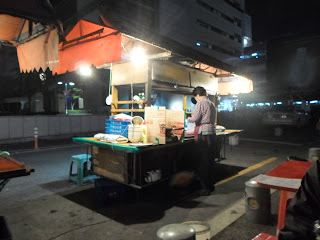 Food
Their menu is simple yet strong.  They offer six items, all popular forms of Anju, meaning food to munch on while drinking alcohol. 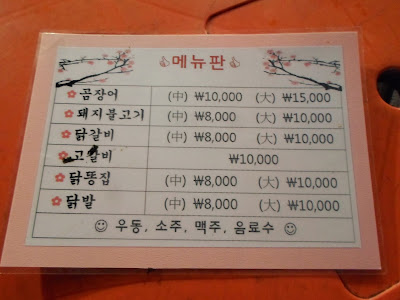 
Atmosphere
As depicted in nearly every episode of a Korean drama ever, Pojangmachas are scenes of a very specific mood.  As the Soju level rises conversations plunge deeper.  Sorrows drown while confessions and reminiscences surface. 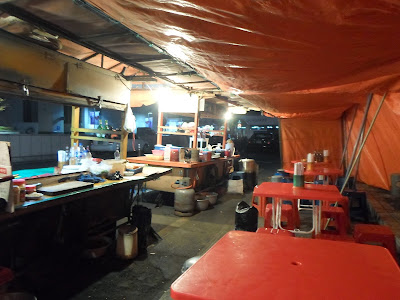 There's just something comforting about those rickety stools and tables, something humbling about the plastic walls.  Pojangmachas are where strangers become friends.

Location
At night, the ajjumas erect their tents in a vacant lot on the south side of Daegu Station (대구역).  Walking out of the main entrance, turn left towards the parking sign and you'll see them.  Note: the subway exits for Daegu Station are on the opposite (north) side of the tracks and department store. 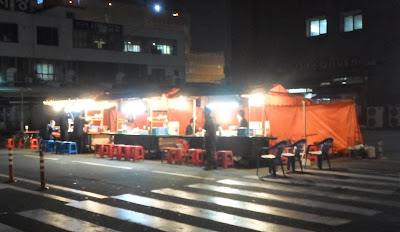 Here's a daytime view (no tents erected) facing towards the southeast corner of Daegu Station, courtesy of Naver's street view mode.  [A pretty cool feature, just go to map.naver.com and click on the little alien-head icon (거리뷰) on the top right toolbar.] 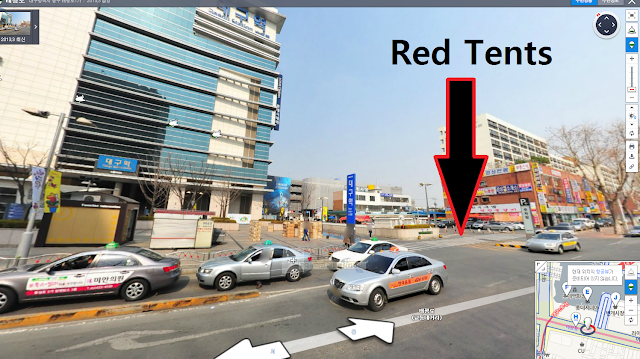 Another landmark is Beongae Market (번개 시장).  The Pojangmachas line the side street leading to the market's entrance.

Are you a fan of eating and drinking at Pojang-macha?  Enjoy a similar setting at other locations throughout Daegu, including:
Know of any other Pojang-macha?  Please share you favorites in the comments below!