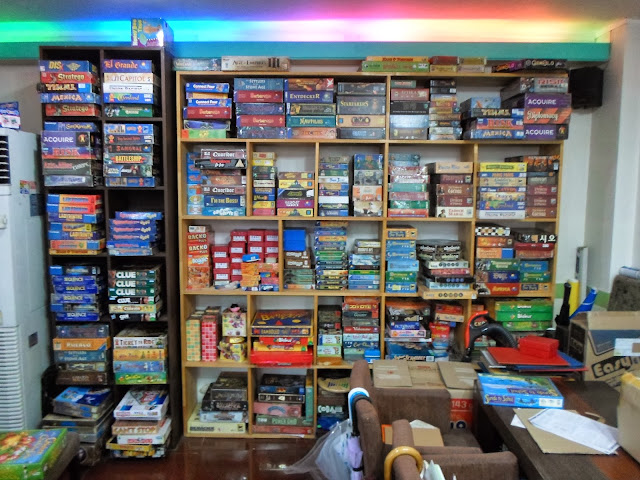 Games
The Board Game Playground has a massive arsenal of games, an entire wall full.  There's entertainment for all group sizes, difficulties, and genres.

The menu conveniently lists and details all of their games.  The stars represent difficulty level and the '# 명' means number of players.  The short menu descriptions are in Korean, but most larger games come with English instruction manuals.  When ready to play, just inform the waiter of your choice and he'll bring it over.  The owner may frown upon de-shelving games yourselves. 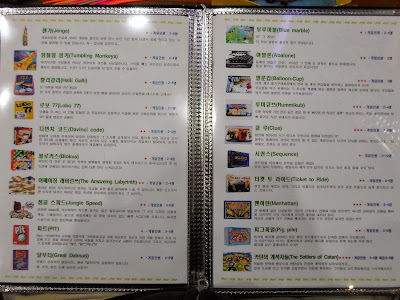 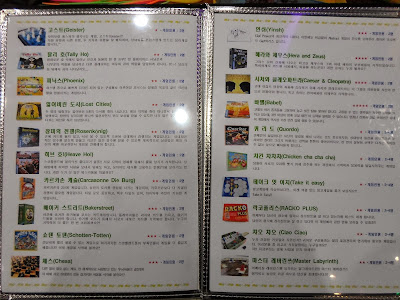 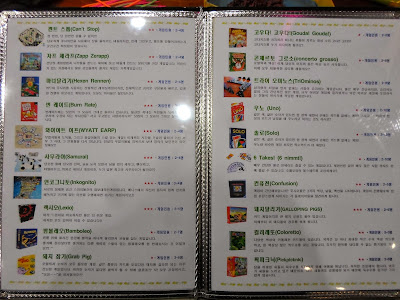 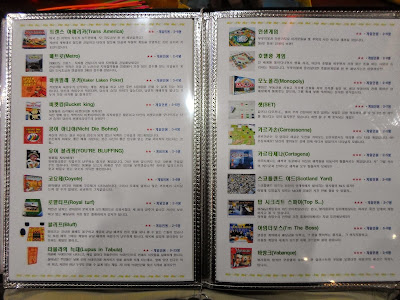 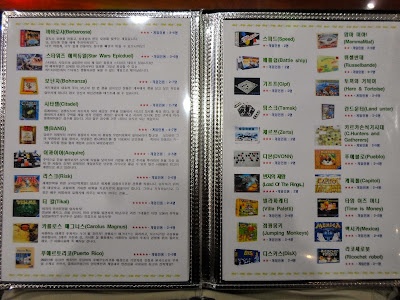 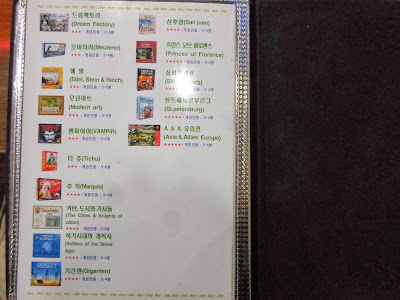 Personal favorites include The Lord of the Rings: The Confrontation, a strategy game similar in mechanics to Stratego (also available here). 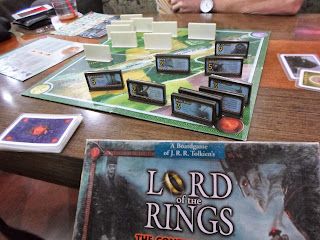 The Axis and Allies series are 2-4 player strategy games simulating the theaters of WWII, specifically Europe 1942 in this edition .  Hold back the blitzkrieg as the Reds, fight on multiple fronts as the Brits, or race across the Atlantic as the Yanks.  Or battle all three as the powerhouse Krauts.  (In the case of only 3 or 2 players, Allied general(s) play as two or all three Allied factions).  Axis and Allies is a glorified version of Risk for the serious strategy fans willing to dedicate several long hours. 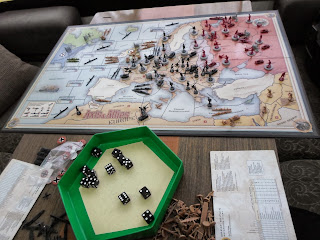 Lost Cities is a 2-player, strategy card game.  Deciding which cards to play and when can lead to frustrating defeats or satisfying victories.  This game is a living example of what Branch Rickey meant by "luck is the residue of design." 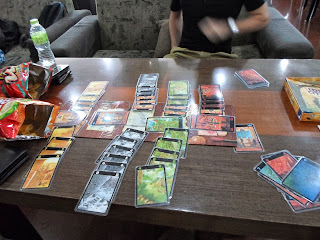 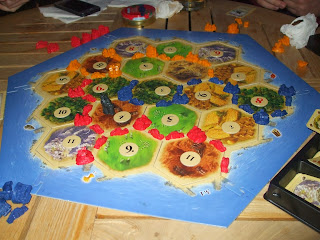 And of course you'll find all of the well-known classics like Clue, Monopoly and Battleship. 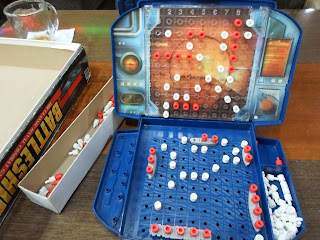 Finally, Jenga or Tumbling Monkeys can be a quick test of dexterity and finesse. 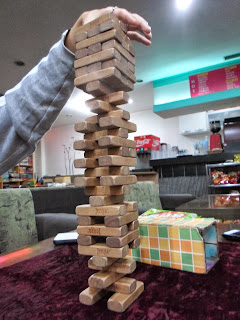 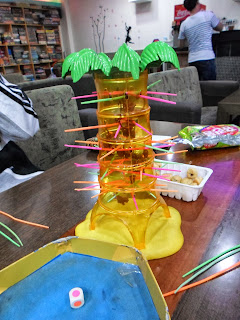 Pricing
But before the fun begins you must choose a pricing scheme.  Upon seating, the waiter will explain (in English) that you have two options:
The second option also comes with a free drink of choice, either soft drinks, teas, coffees that would cost between \2,000 and \3,000 or a smoothie that would cost \2,500.  So unless you plan on staying only one hour and don't want a drink, this unlimited option seems the better deal.

Closing time is midnight on most days, 11pm every other Monday. 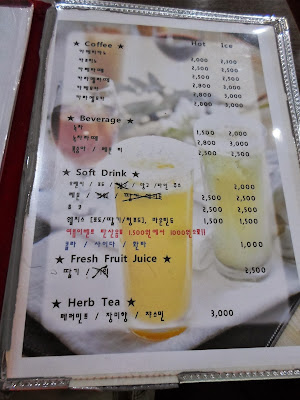 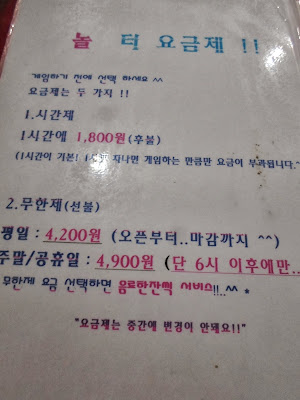 They also offer snacks like chips and crackers, but no real food. 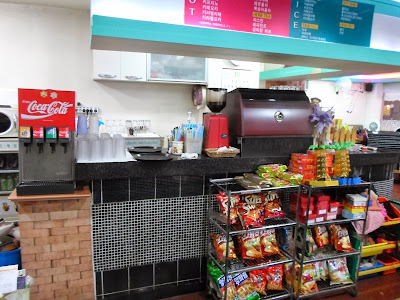 Atmosphere
The Board-game Playground has about 15 tables, all with comfortable cushioned seating.  The place is usually lively and packed on weekends.  Patrons tend to be buddies or couples around high school to university age. 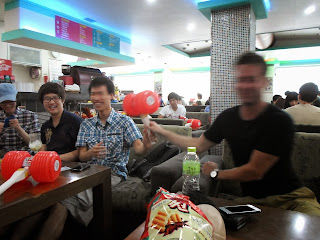 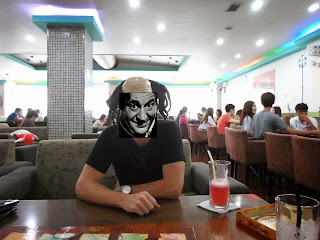 Raise the stakes and place a wager on the game.  Humiliate your vanquished foes by making them wear a goofy hat or wig.  Or the ultimate embarrassment: enlist a stranger to whack them in the head with a squeaky hammer.  There used to be a giant metal pizza tray that hung from the ceiling and could be dropped on the head of someone sitting on the stool-of-shame below, but it has since been removed.  Too many casualties I suppose... 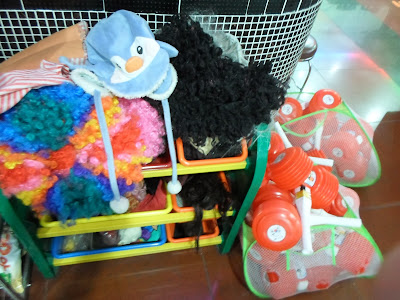 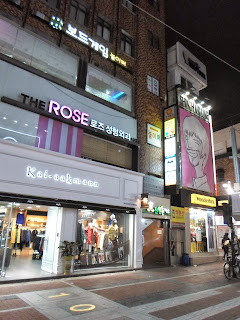 Location
Board Game Playground is located downtown, just south of the Stage and northeast of Banwoldang Station (반월당역).  From Samduk Fire Station (삼덕소방서), head into downtown and make your 4th major right.  It's immediately around the corner, above a Wonderbra and a Kai-aakman clothing store, on the third floor. 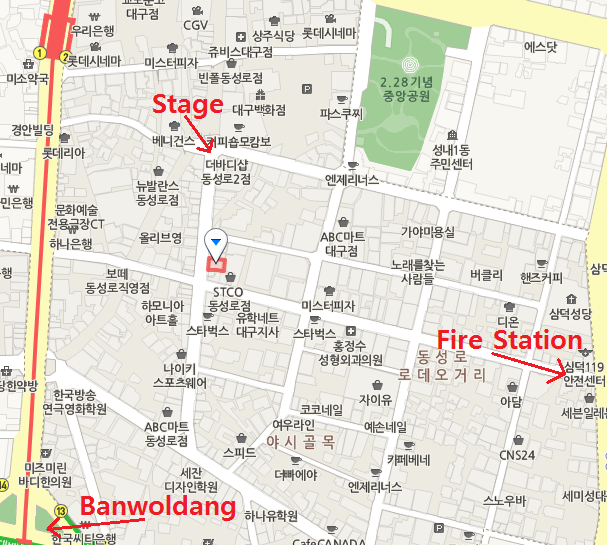 Email ThisBlogThis!Share to TwitterShare to FacebookShare to Pinterest
Labels: Board Game Cafe, Downtown Daegu, Other things to do in Daegu