Korean food and alcohol are a matching couple.  Dining at a Korean restaurant without drinking is like a Bi-bim-bap without the bap.  Being invited to dinner by Koreans without being forced to take shots is less common than fan death.  In fact, fan death is actually caused by eating and drinking in a room with a fan and then dying of a Soju overdose.

For many, food is merely the chaser of shots.  There is even a word in Korean that refers to such food: 안주 (ahn-joo).   Livening up a dinner with alcohol reciprocates kicking off a party night with food.  I won't try to explain the significance of this drunk-full bond by preaching about culture or philosophy.  Instead, I'll simply list the practical benefits.

First, a shot of Soju sterilizes your mouth like rubbing alcohol, preparing your taste buds to fully enjoy their next food encounter.  Second, because Soju can be harsh on the unfamiliar or the sober, chasing with food is the most effective countermeasure. And third, It's just plain fun.  Unlike western restaurants, where individuals order separate pre-cooked dishes, Korean food encourages preparing and eating as a team.  Equally communal is the alcohol; instead of drinking their own beer or cocktail at their own pace, diners at Korean restaurants are slamming shots in unison.  Further adding to the joy of eating and drinking Korean suh-tyle, is the challenge.  One must always be maintaining the equilibrium between the table's entree, side dish, and alcohol levels, while also manhandling and cooking the meat to the preferred gradation.  A Korean dinner is never dull, and orchestrating it all successfully can be rewarding.

Below are some drinking games to help keep you busy, as well as some basic guides on drinking at Korean restaurants.

Number Guess
All you need is a Soju cap and your wits.  Underneath the cap, there is a barely-visible number between 1 and 50.  One person holds the cap with the number in mind.  The others take turns trying to guess it, with the cap-bearer instructing "higher" or "lower."  When a victor guesses correctly, the two people next to him must drink.  Or, with smaller groups, the guesser(s) have a set number of attempts to win.

Variations: Try not to be the one who guesses the number.  Instead trap your opponents into saying it, similar to Basin Robbins 31 (see below)

Or, the quickest way to give birth to a champion, everyone guesses a number before anyone sees it.  Then look, and the closest person wins! 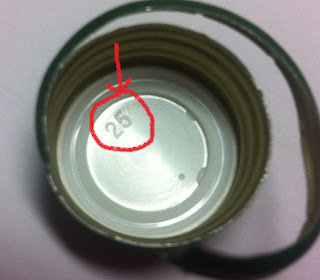 Flicky-flicky
With a Soju cap, twist the spiraled seal into a rod.  Each person attempts to flick it off, then passes it to the next.  Whoever, dislodges the rod from the cap assigns a shot to another, or both their neighbors.

For Pros Only: If you successfully discharge the shrapnel rod into the flesh another person, they must drink double.  If the target manages to catch it, the failed flicker drinks triple. 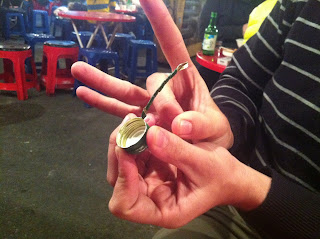 Baskin Robbins Thirty-one
The point of the game is to not be person to say "thirty-one."  With a group, go in a circle, and each person can either say one, two or three numbers in order.  For example, when my turn comes after the previous person said "six," I can either say "seven," or "seven eight," or "seven eight nine" - my choice.  Allegedly there's some trick to knowing what to say around the 26 mark to guarantee your safety, although I have no idea what it is and if I did I wouldn't tell you.  The loser who's stuck saying "thirty-one" must drink.

With a group, go in a circle, with the first person saying "one" and the second saying "two." Thy next person shall clap on three, no more, no less.  Three shall be the number thou shall clap, and the number of the clapping shall be three.  "Four" shall thou not clap, nor thou clap thy "two," accepting that thou then lose and drink.  "Five" is right out.  Once the number six, being the sixth number be reached, clappeth again.

Skip a bit Brother Maynard.  The point is, any number containing a 3, 6, or 9 requires a clap, such as 13 and 16 (not multiples of 3).  A number with two of those digits, such as 36, requires a double clap.  The game is tougher than you think, especially if you've been playing and losing games such as these.


Soju
소주, or Soju, is the bread and butter of Korean alcohol.  It was first introduced by invading Mongols in the 13th Century, and has subjugated more and more brain cells ever since.  Traditionally distilled from rice, food-shortage laws in the 60's forced a switch to grains and sweet potatoes.  Order 참이슬, or Chamisul, for the nation-wide favorite, or keep it local with Daegu's brand 참, or Cham.

맥주, or beer, despite it's worldwide fame, is still in it's infant state in Korea..... Well more like a state of infants being stomped on by a pair of bully teenagers.  Beer production has always been dominated by two companies:  Hite-Jinro (also the top Soju producer) is responsible for the beer labels of Hite, Max, and Dry Finish D; and Oriental Breweries puts out Cass, OB, and Cafri, and is also licensed to brew Budweiser and Hoegaarden.

First introduced in the early 20th century, beer is still seen as new and foreign, never proudly claimed as Korean.  I can see why, as the duopoly has limited Korean beer to a very bland, low-quality and mass-marketed selection.  Although there is hope since 2011, with the relaxation of a law that hitherto has restricted competition from micro breweries.  But until that bears fruit, there is always the respectable selection of imports at the large department stores. 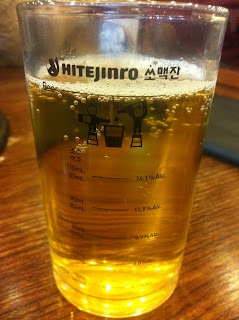 소맥 is a mixture of Soju and beer.  It can be an easy escape for those who can't handle a straight shot of Soju, but still want to partake in the 건배's, or "cheers."  Or it can be for serious alcoholics who find straight beer is not a strong enough chaser for their Soju shots.  It's also the result and the punishment for a game of Titanic (see games above).

Of course if your concoction contains more Soju and less beer, the stronger it will be, as some conveniently-metered glasses illustrate.

막걸리, or Makgeolli, is a traditional Korean rice wine.  This sweet milky goodness is popular on rainy days, after long hikes, and alongside spring-onion pancakes (파전).  It's traditionally served in bowls with a ladle, although it also comes in plastic bottles.

Just be sure to stir, or else a thick bottom layer will settle leaving the top watery.  With bottles, don't shake, as some brands are slightly carbonated; instead twirl it by holding the top in your fist and drawing circles with the bottom.  You can sometimes find it in different flavors, such as corn (옥수수)  or chestnut (밤). 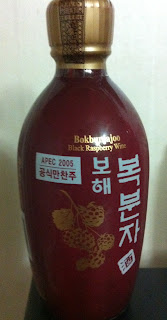 복분자, or Bokbunja, is a Korean black raspberry wine hailing from the southwestern provinces and Jeju Island.  It's very sweet and delicious, and tastes best on special occasions.  It's not a very popular beverage in Korean restaurants due to it's high price.

백세주, or Baekseju/Bekseju, is a traditional rice wine similar to Japanese Sake.  It is flavored with herbs, such as ginseng.  The name, literally "hundred years alcohol," comes from the fact that it will extend your life to over a hundred years (yes, "fact").  It is sold in some restaurants, although not all due to its high price compared to Soju and its diminishing popularity. 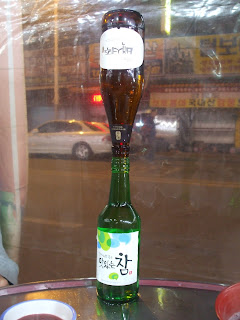 오십세주 is a play on words meaning "fifty years alcohol" because it's made of half Soju and half Baekseju, or "hundred years alcohol."  I guess it means if you drink too much of it you'll die before you're fifty.

By stacking the bottles mouth to mouth and waiting twenty minutes, the two alcohol types mix perfectly.  Make sure the denser Baekseju is on top, and you'll be able to see the cool swirly currents.  The hard part is getting them together with minimal losses.  Try covering one with a card, putting them together, then sliding it out.  The results are smooth, tasty and will get you drunk faster than you'd expect

Unless your're a hunter-gatherer or a Spaniard in the 1930's, you probably live in an authoritarian society.  While in the West we claim ideals of equality despite living by them selectively at best, here in Korea, the hierarchy is honest, open and consistent.   Custom demands very specific interactions at a Korean dinner table.  No matter how symbolic these gestures, they are what keep the social pyramid from crumbling.  Perhaps drinking away grievances also helps.

At a dinner with superiors, here is your standard round of Soju shots:

Of course these apply to someone older or a boss, but also when meeting someone for the first time.  The gestures should fade after determining your ages are similar, especially as the relationship becomes more friendly than formal.


Tips for Pros.
These can be applied between any age or status level, but are especially respectful to those above you:

In the case of a formal dinner with a clear superior, do NOT:
These are the roles of the superior.  It's up to them to lead, and anyone else attempting to do so will be out of line.  Generally, if you find yourself in doubt, there's a single piece of advice that never fails: admit that you don't know everything, shut up and observe.

As a foreigner, especially a newbie, you may be given some leeway with these formalities.  Like taking home a new puppy that may crap on your floor, disappointments are expected to happen.  It's just more pleasant if they don't.