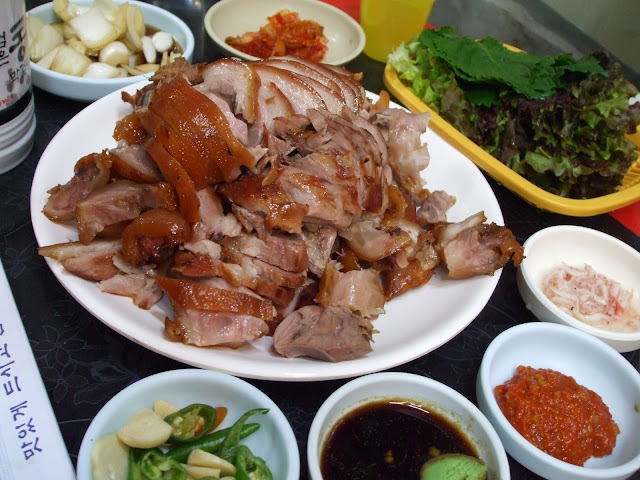 Food
족발(Jokbal) is a half Chinese/half Korean term meaning "foot foot."  It's actually the whole lower leg of a pig, prepared by a two-step process: 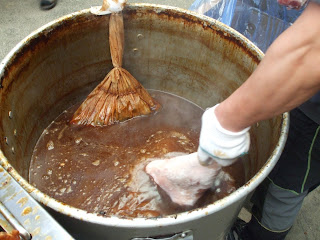 1) First, it's boiled in water along with 파 (spring onion), 마늘 (garlic), 생강 (ginger) and other spices.  While the meat cooks these flavors replace any pungent porkiness.

2) The next step has a Korean verb, but no direct English translation.  간장 (soy sauce), sugar, alcohol and other secret ingredients are added to a small amount of water.  Then it's boiled down, so the water evaporates.  The remaining sticky sauce glazes the skin layer of the pig foot. 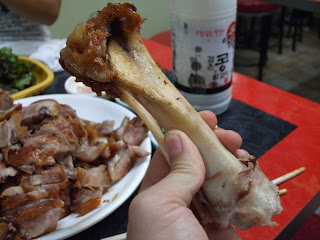 족발 (Jokbal) vendors usually offer the front feet for 25,000 or rear feet for 20,000.  The difference is pigs' front feet are more delicious, according to our dude.  (They are also larger, we found out later.)   Upon ordering, your respective dude will slice up the meat and serve it in a pile along with the leg and feet bones.  The hooves are often removed and sold as separate snacks, although ours still had one attached.  Hairs should also be shaved off, although sometimes they linger.  족발 may not be enjoyable for picky eaters, the fainthearted, or others conceived with a weak sperm. 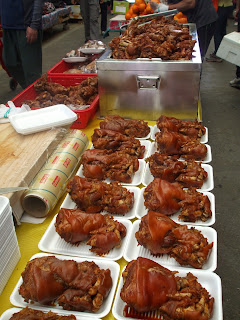 Like most Korean foods, 족발 has its celebrated health benefits.  The skin and tendons contain essential proteins, such as collagen and elastin.  Ingeniously named for being "elastic," elastin allows the skin to maintain form.  Elderly skin becomes wrinkled and saggy dues to a lack of natural elastin production in the body.  So unless you found The Fountain or a Time Machine, replenishing elastin by eating pigs' feet is your next best chance at eternal youth.

족발 is also rich in amino acids that protect the liver and remove heavy metals from the body, such as lead, mercury and unobtainium.  This has been scientifically proven  (except for the last one perhaps).  And you can't argue with "scientifically proven" stuff no matter who says it, at least not until the next paradigm shift. 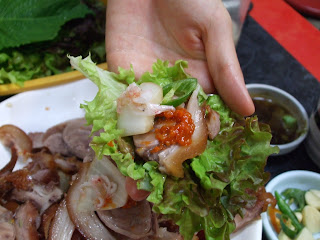 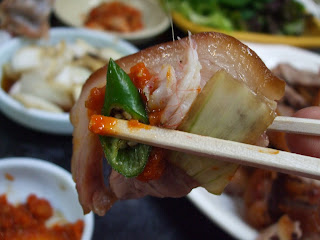 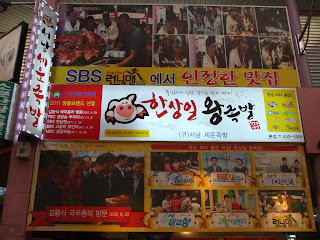 Atmosphere
Along a strip of 서남 시장 (Seonam Market) are a half-dozen 족발 (Jokbal) vendors.  Most of them have small seating areas in the back.  The vendor we went to proudly claimed to be the destination of many notable nobles, including mayors and news anchors.  Most of all, a team of celebrities on the popular TV show Running Man stopped here during a competition to find the most famous foods of Daegu.   Unfortunately, 족발 wasn't on the list and their team ultimately lost, but the owner still hangs banners boasting his fifty seconds of fame. 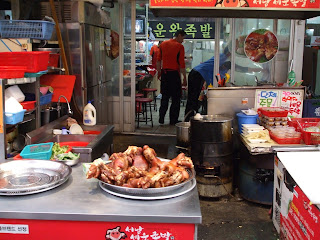 I'm beginning to feel like an alcoholic on a broken record, but it's worth mentioning that 족발 (along with 95% of the other Korean foods I've written about) makes a great source of anju, meaning food that's eaten while getting drunk.  The vendors serve Soju only, but hit up one of the nearby convenience stores if you'd prefer 맥주 (beer) or 막걸리 (makgeolli). 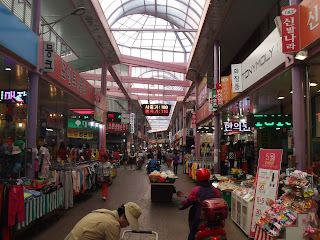 The alley of 족발 (Jokbal) restaurants is located inside 서남 시장 (Seonam Market).  The market is located next to 감삼역 (Gamsam Station).  You can show or tell a cab driver either location.  It'd be about \6,000~7,000 and 10-minute taxi ride from DT.

By Subway: Ride the green line (line #2) to 감삼역 (Gamsam Station).  It's west towards 문양 (Munyang), and it's one stop after 두류역 (Duryu [Park] Station). 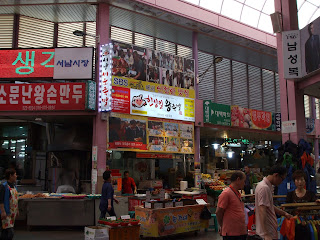 Walking out of exit #1 at 감삼역 (Gamsam Station) there are two entrances to the market.  Go into the second (main) entrance and a block or two straight ahead are the Jokbal restaurants.

[Head to this one farther down for higher quality but more expensive Jokbal.]

[If you enjoy the market scene, I can recommend a few other ROKin' Daegu locations.  Try the Bulgogi Tents near downtown, a DIY Bibimbap in an art-mural alley, and live octopus at Chilseong Market.]