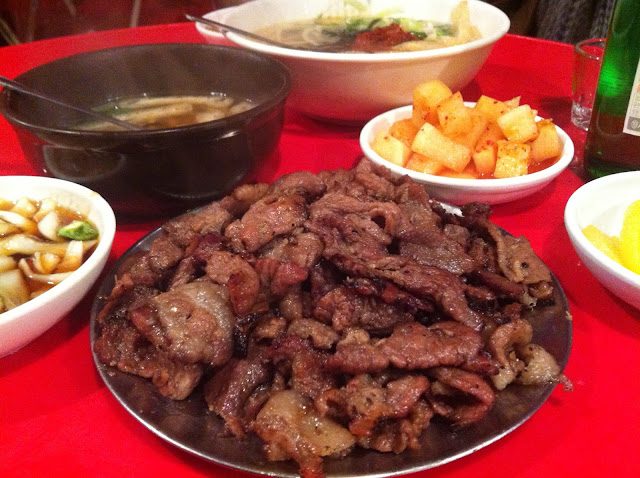 Food
As the name of the entire neighborhood  implies, they serve 불고기 (bulgogi), which is marinated and fried pork.  And that's all they have, other than 우동(oo-dong), a thick noodle soup.  While bulgogi is their only meal, they serve copious amounts of it.  It's delivered in massive piles with the smallest (pictured above) fit for two people and only costing \5,000.  The largest is \20,000, although unless you have eight people eager to scarf it down, you're better off with periodic small orders that won't go cold.  (The small seems to offer the best value anyway.) 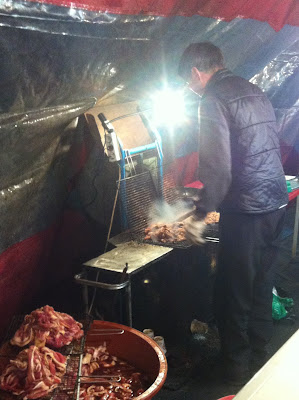 The \5,000 order can easily fill two stomachs, granted you also have the noodle soup, which is \3,000 served for two people in two bowls.  So overall you're looking at \4,000 per-person meals!....plus alcohol of course.

Side dishes are limited to pickled radish, kimchi'd radish, and onions in soy sauce.  One soda is also given as 서비스 (suh-bee-seuh), or free "service." 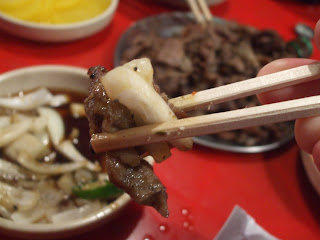 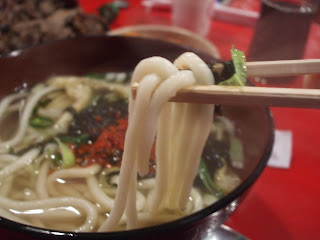 Atmosphere
The bulgogi tents are essentially drinking spots.  They are only open at night and provide a cheap source of 안주 (an-ju), which refers to food eaten along with alcohol.  Therefore, the tents are usually loud, drunk, and, especially since appearing in a Running Man episode, crowded.  The place has an overall lively and authentic vibe to it. 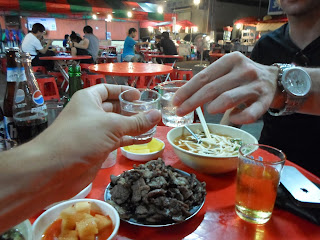 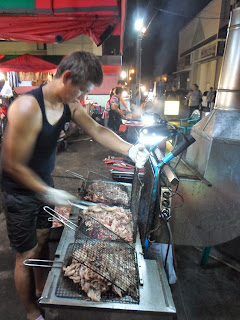 Don't expect cleanliness or comfort, however.  The tents have pavement or gravel flooring because they are parking lots by day.  Patrons sit on small plastic stools around a flimsy plastic table.  Most locations share a large tent between several Bulgogi merchants, all of whom fight to seat you in their respective section when you approach. 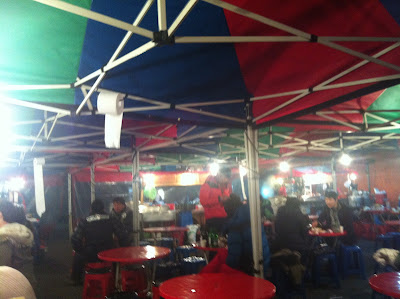 Location
It's northwest of Jungangro subway station, downtown. It's about a 20 minute walk or a five minute and ~\3,000 taxi ride from Jungangro.  Just show or tell the cab driver:

He should drop you off across from a Daegu Bank.  The alley immediately next to the bank is the actual bulgogi alley.  The next alley down also has tents, including the one I usually go to. 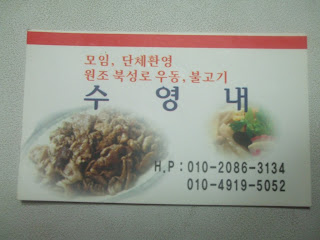 [If you enjoy the rustic, local feel and the alcoholism of such tented markets, I recommend a few other ROKin' Daegu locations.  Try pig feet in Seomun Market,  a DIY Bibimbap in an artists' alley, and live octopus at Chilseong Market.