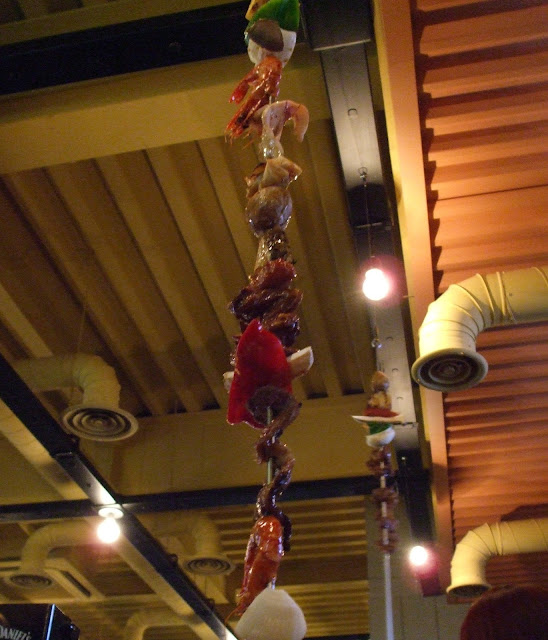 Food
The main attractions here are their lengthy larders: 1 meter of meat and more hanging above your table. 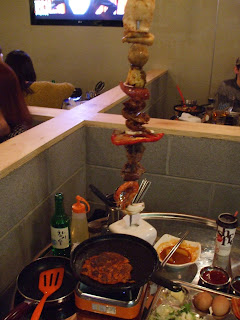 The last two, the chef's recommendations, also contain assorted veggies but focus more on the meat.  All three are marinated in a sweet and thick teriyaki sauce, which I mistook for maple syrup (or visa-versa).  The sauce drips down into your personal frying pan, where you also pull down the next dangling delights for reheating. 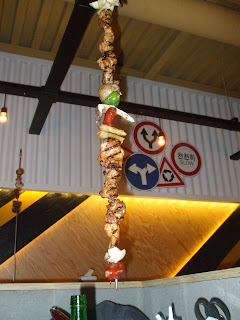 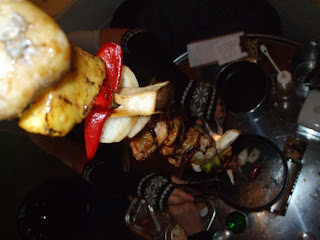 They serve other dishes, such as seafood 전골 or kimchi/pork 전골 (#'s 4 and 5 on the menu respectively), which were traditionally rich people's versions of 찌개, the spicy stews.  But I wouldn't bother with them, because the side-dish buffet offers mini-meals for free!  The 오뎅 (fish cakes on a stick), 떡볶이 (spicy rice cakes), 군만두 (fried dumplings), fried chicken, ramen noodles, salads and fruits are plenty to make you 배불러 ("full").  You can also fill a bowl with kimchi-pancake batter and fry up some 김치전(kimchi-jun) at your table.

So between the three of us we only purchased a \20,000 skewer, as a ticket to a table and unlimited 안주 (anju), a.k.a. food to snack on while drinking.  Alcohol sold separately of course. 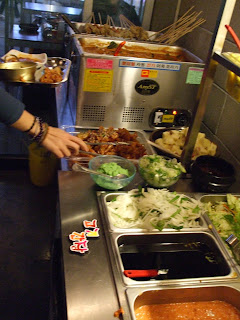 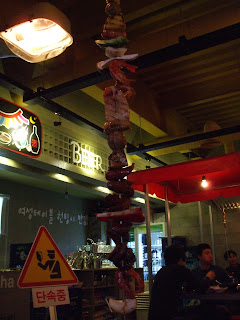 The restaurant's theme is 포차(pocha), short for 포장마차 (pojangmacha), or tented street-food vendors.  So it has urban decor, with cinder block booths, plastic outer doors, and street signs.  (One sign warns of police inspections, a reference to actual street vendors who are shut down by city governments.)  Most of the front and far back tables have the red market overhangs to hang the skewers.  The central tables are more open, and allow views of the big screen TV and wall projector.

The vibe is overall loud and lively.  Patrons enjoy more bottles of Soju here than other places, due to the selection of free side-dish 안주 (anju).  The speakers bump the latest club hits, probably on a direct feed from Thursday Party across the street.  The white writing behind the bar (pictured below) offers females to trade their dignity for half price meals, and have employees arrange for them to sit with "hunting" men, a.k.a. booking.

The place just opened a week before this write-up, but has already exploded in popularity.  On Friday night, it was nearly packed by 7pm.  Shortly after there were people waiting around for tables. [UPDATE: as of the summer of 2014, this location is now closed!] 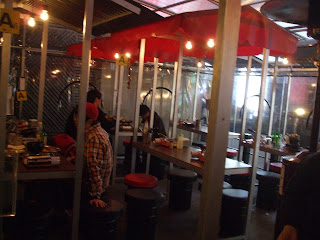 Location
The location picture here is downtown, across from Thursday Party 1.  [now closed]

There are several other locations throughout Daegu.  See Naver Map 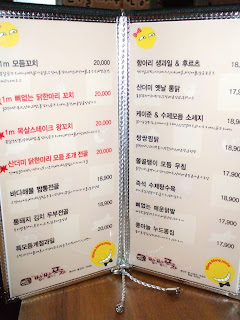 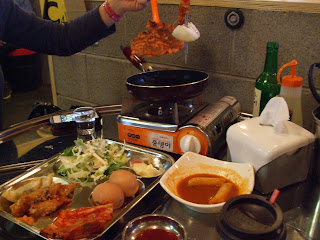