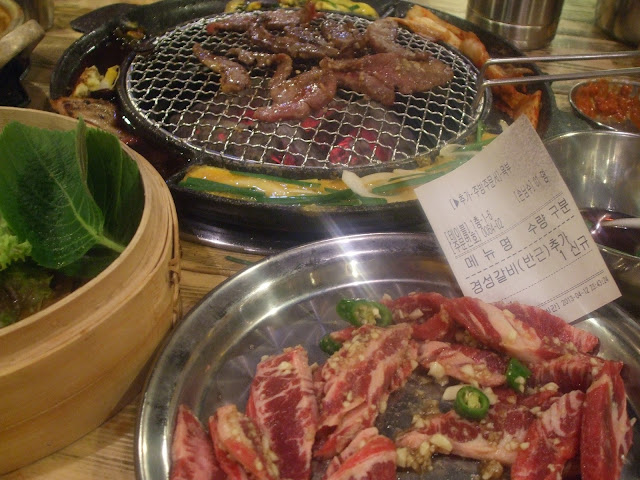 Food
Korean BBQ is superior in many ways.  One is the expanse of sides and sauces that orbits the meaty core.  As masters of such a universe, you have the freedom to manipulate these forces, bending them to your will and creating satisfaction and deliciousness that is, like the sauces and sides themselves, infinite.  (Sounds better than, for instance, some fat cook at a Western restaurant taking a dump on a plate and handing it to you. Think long and hard about that fact the next time you pass up Korean BBQ for some taco or spaghetti joint.  Hot dump on a plate.) 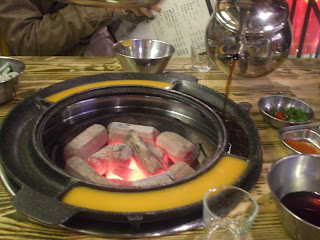 Anyway, here at 경성 상회 these godly powers are further enhanced by the grill's steel compartments.  While not the first time I've seen this, 경성 상회 does it best.  First of all, as well as scrambled 계란 ("egg"), they also pour in 간장 ("soy sauce") with slices of spicy 고추 ("pepper" and "penis," but only the former in this case I'd hope).  Also, this is the first place I've seen this as a permanent fixture, rather than employed only for a specific cut of meat.


Another respectable trait of 경성 상회 is how they take pride in what they serve.  Some other restaurants will simply whip out their meat and flop it down on your table.  They expect you to put it in your mouth without knowing anything about its condition or origin, unless you ask, but even then the dude may not know or care or imply any answer beyond "well my boss wants money... so just buy the shit." [ok. sorry, rant over]  At 경성 상회 they have passion for their purpose, and communicate that with their customers.

Upon delivery, each serving includes a paper slip that identifies what's cooking.  Also, their devotion is immediately clear from their menu, which is organized like a book.  The inside cover has basic details, like open hours (5pm - 11am), address and contact info.  The next page is the introduction, which explains their history and mission statement.  Then, along with diagrams and explanations, content is organized into two chapters: Pork and Beef. 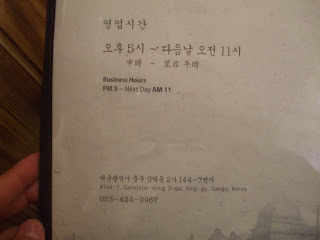 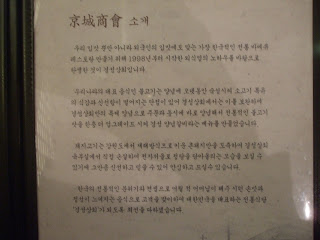 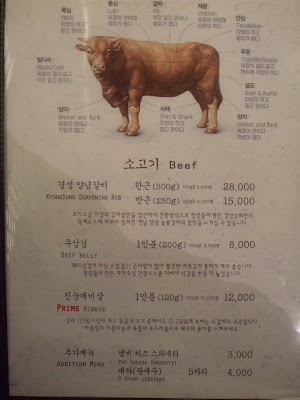 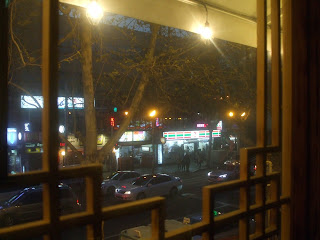 경성 상회 is fancy, clean and new, since it just opened about a month ago.  It's also quite large, stretching three stories high.

The 2nd floor in particular has a few notable features.  The window seats provide views overlooking the bustling taxi hub of 삼덕소방서 (Samduk Fire Station).  This seating area also has glass flooring, which was kinda cool, but had me treading carefully, and may have ladies (and Scotsmen) worried about perverts creeping below.

The coolest feature, in my opinion, was the movie projector.  While I don't think Korean subtitles could do justice to Charlie Chaplain in this flick, the presentation is still interesting.  In what must be a modern invention, the projector screen was a thin material, allowing the movie to be visible from both sides.  Yet the screen's design resembles an unraveled, traditional scroll. 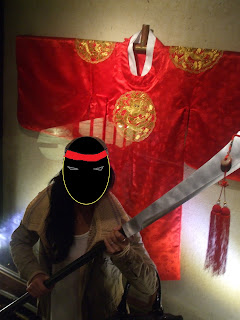 The ancient movie screen is one example of 경성 상회's "clash of cultures" (more like "clash of eras").  As they took the name 상회, a term for restaurants in the old days, they are clearly going for the traditional look.  They succeed for the most part, with wooden surfaces, oriental artwork and decorations of swords and scrolls.  Upon arrival you almost feel privileged to feast with Korean feudal nobility.... until the speakers bump "Apple-Bottom Jeans."  Not only does the music clash with the atmosphere, it also clashes with itself, at one point playing "Hey Jude," "The Macarena," and some K-pop hits in succession. 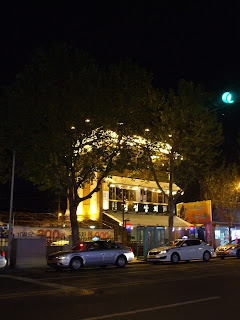 Across the street from 삼덕소방서 (Samduk Fire Station).  Look for the giant wooden, well-lit building down to the right.


[It's also across the street from my favorite place to grab some late-night Hangover Soup, as well as the Clam BBQ place.] 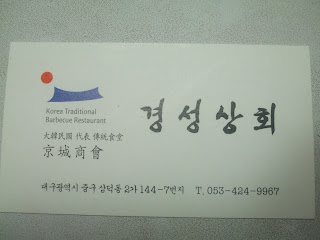