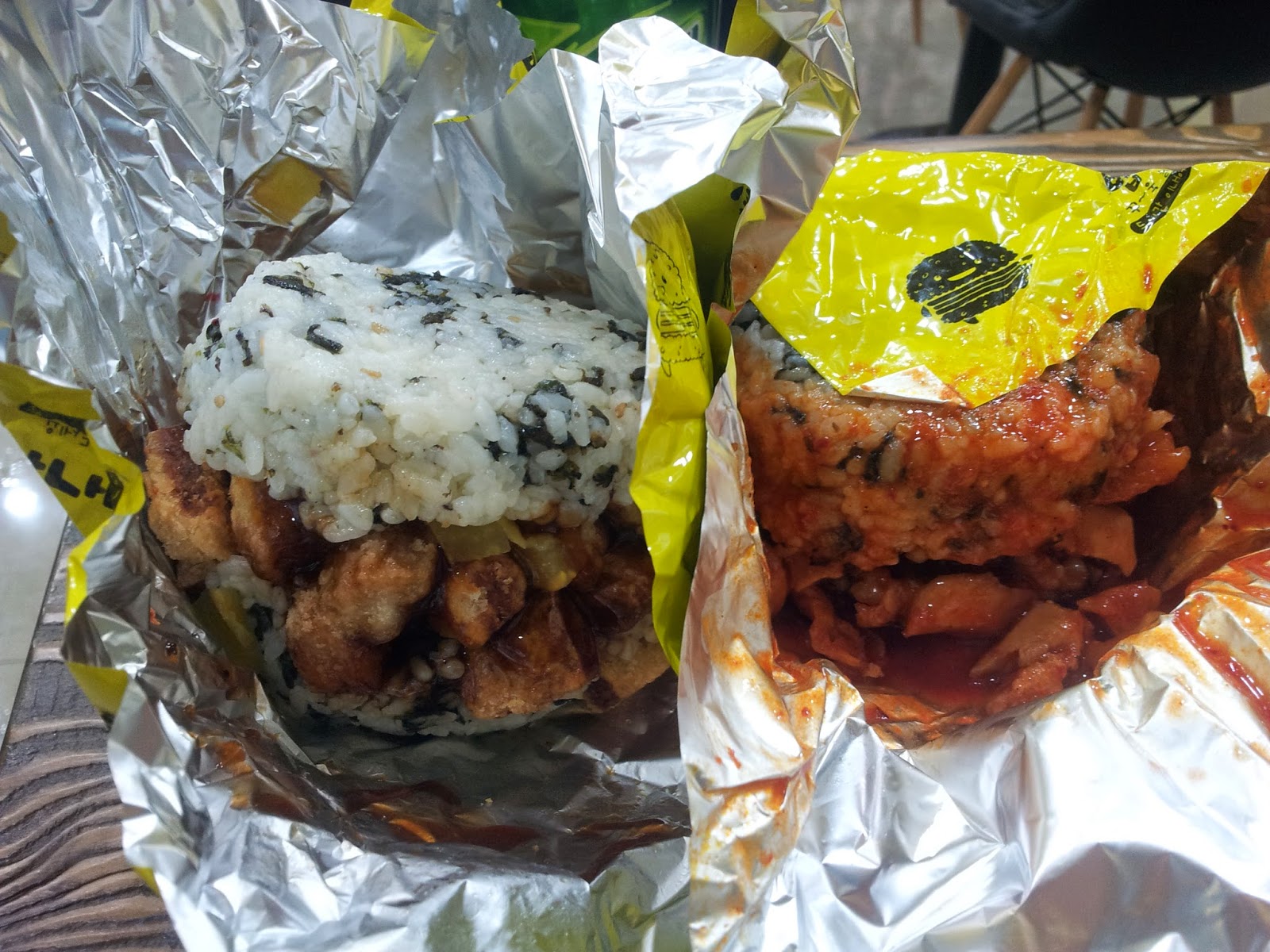 Food
Bongousse is a chain of fast food restaurants throughout Daegu.  They serve Bap-bergers [sic], an Eastern take on a Western tradition.  Instead of buns, they are bound by sticky rice and seaweed; instead of patties, they are loaded with Korean classics like bulgogi, spicy chicken (dak-galbi), and spicy pork (jaeyuk).

So how do these bunless wonders hold up?  For only a fraction of the cost of their western counterparts (1,500 - 3,000krw), they're worth a closer look.


Let's start with my #1 recommendation, the Chili Chicken Bap-berger (치리치킨 밥버거), pictured below.  With fried chicken, pickled radish and a reasonable amount of sauce, it avoids the weaknesses of some of its colleagues. 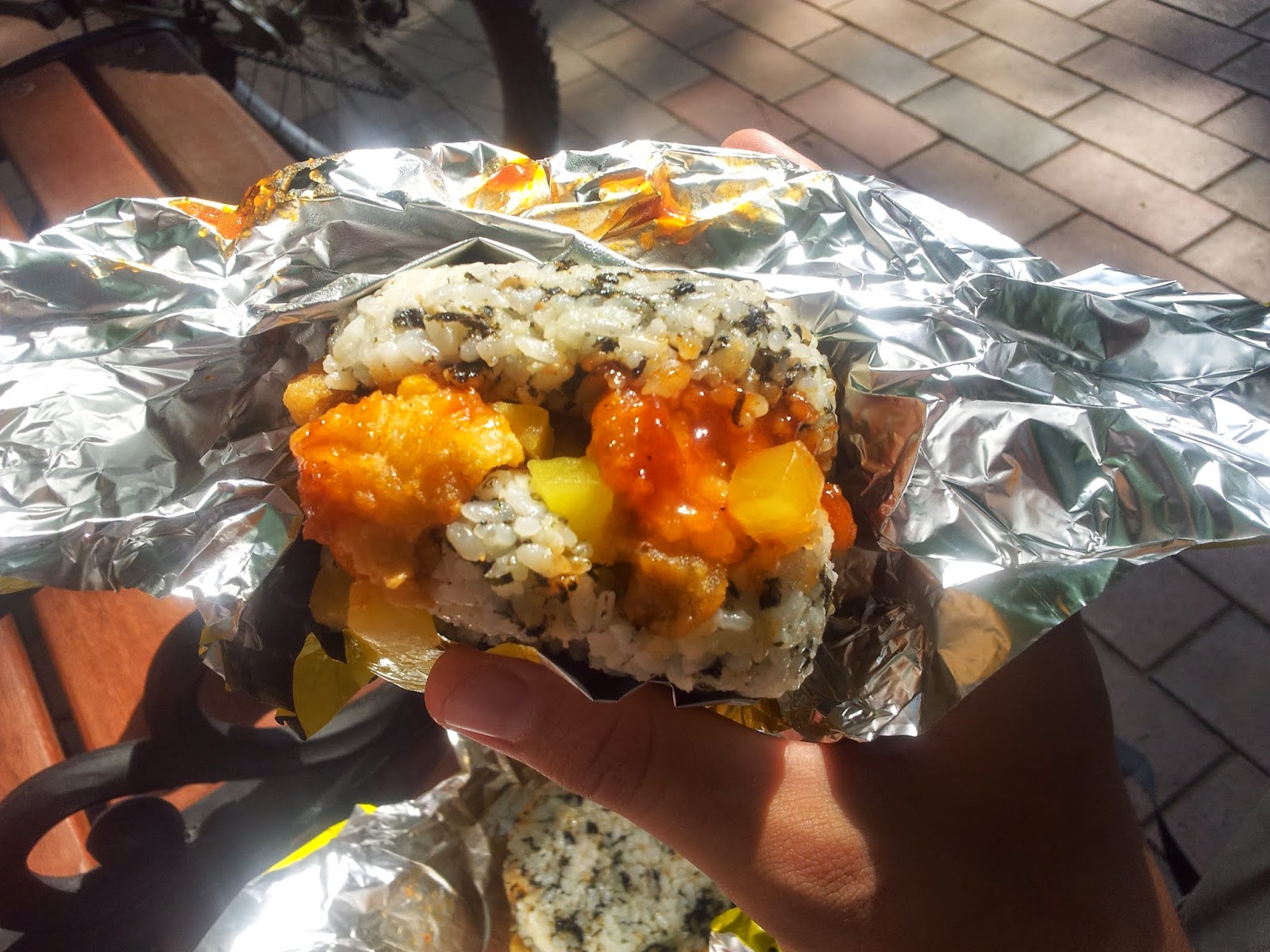 
I'd avoid some of the saucier ones like the Dalkgalbi Bap-berger (닭갈비 밥버거) pictured here.  Over-lubricated and lacking structural integrity, they tend to collapse into a sloppy mess.


You can trust in the stability of a Donkas Bap-berger (돈까스버거).  The daikon radish chunks are a tasty addition [so tasty that some confuse them with pineapple]. 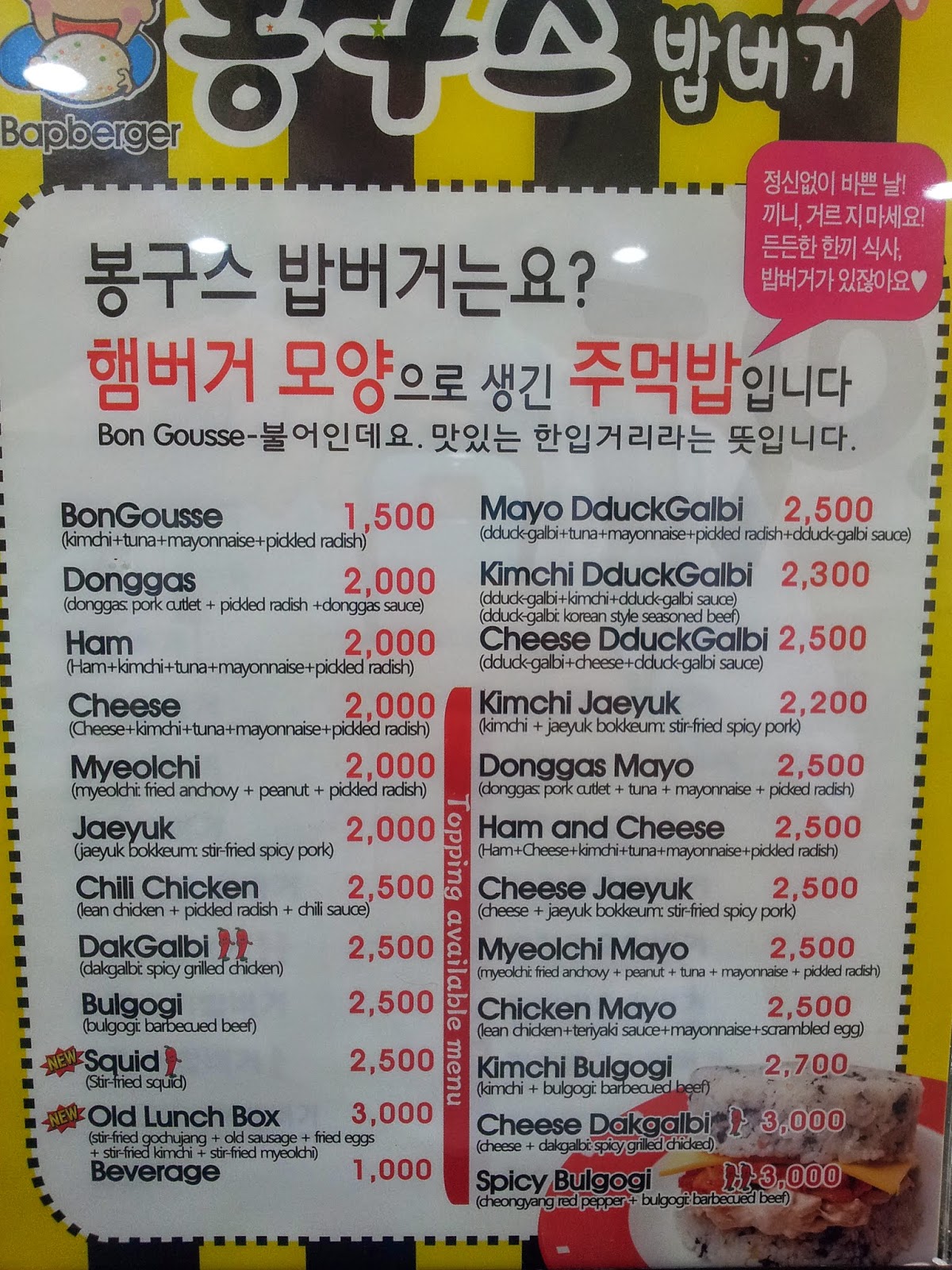 Atmosphere
Bongousses sport the type of sterile, plastic interior you'd expect from a fast food joint, similar to your local Babwich.  Sometimes they are crowded, like the one near Jungangno Mass Transit often is; sometimes they are empty, like this one near 2.28 Park.  (see locations below) 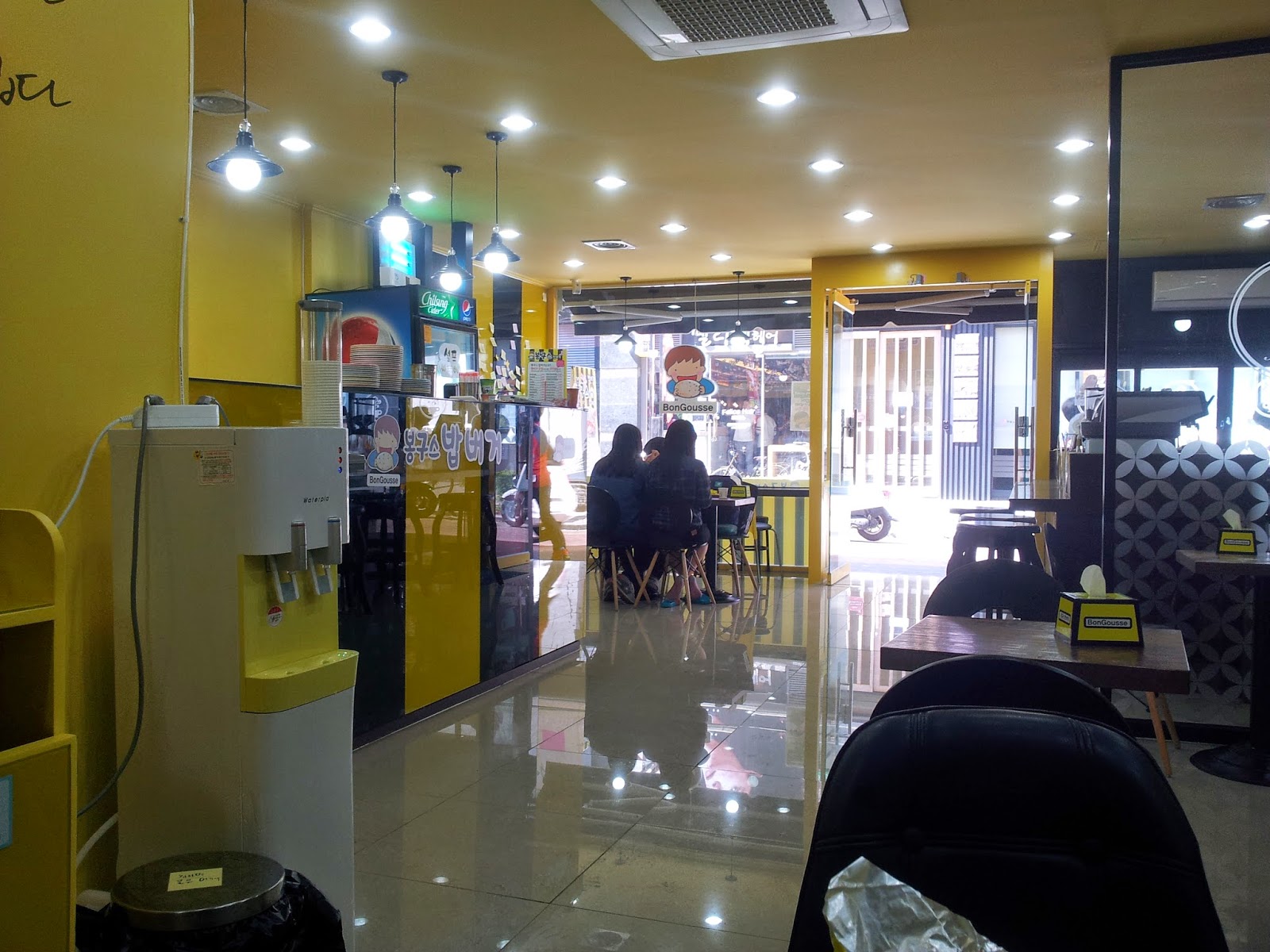 Witness your bap-berger being forged on the assembly line.  First your ingredients are removed from the microwave, pounded into a mold, then wrapped.  Ask for pojang-hae jusaeyo (포장해 주세요) for take out. 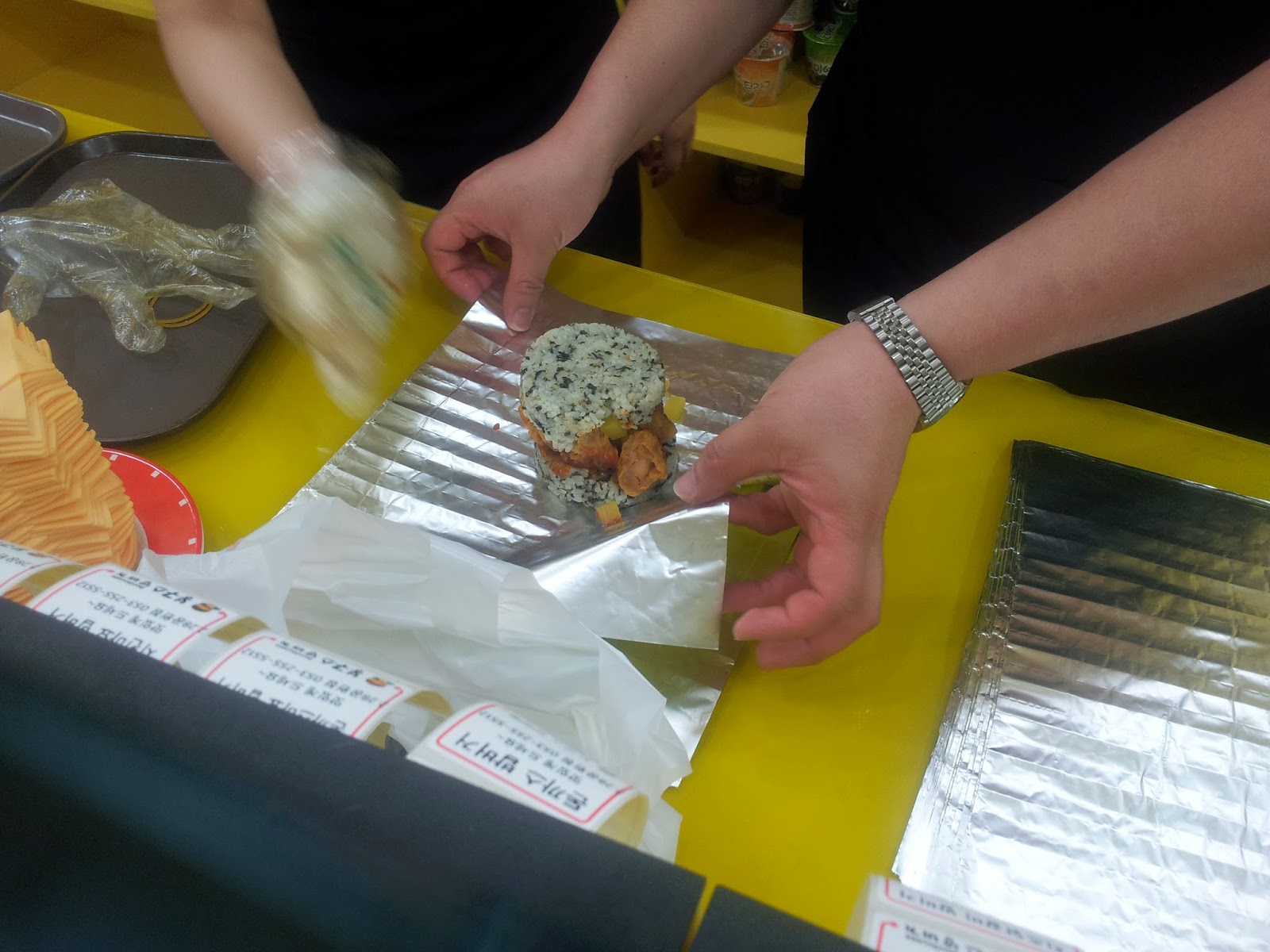 Location
There are thirty Bongousses located throughout Daegu, according to Naver Maps. (Open map of all locations)

The one pictured here is downtown, accross from the 2.28 Park, around the corner from the famous Jungang Deokbokki.  (Open map of downtown location A) 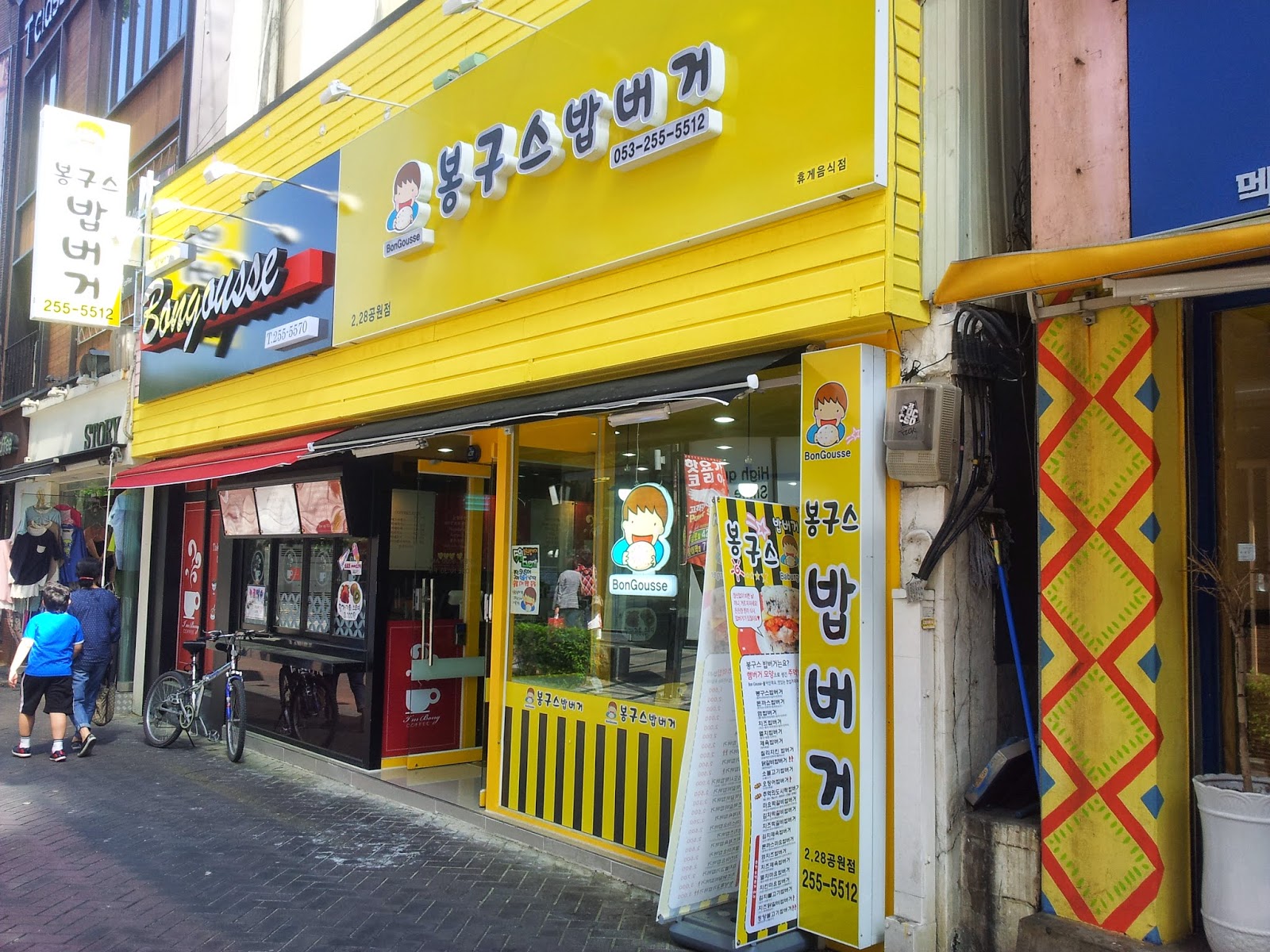 There is another downtown Bongousse, straight a few meters out of Jungangno Station exit #2. (Open map of downtown location B) 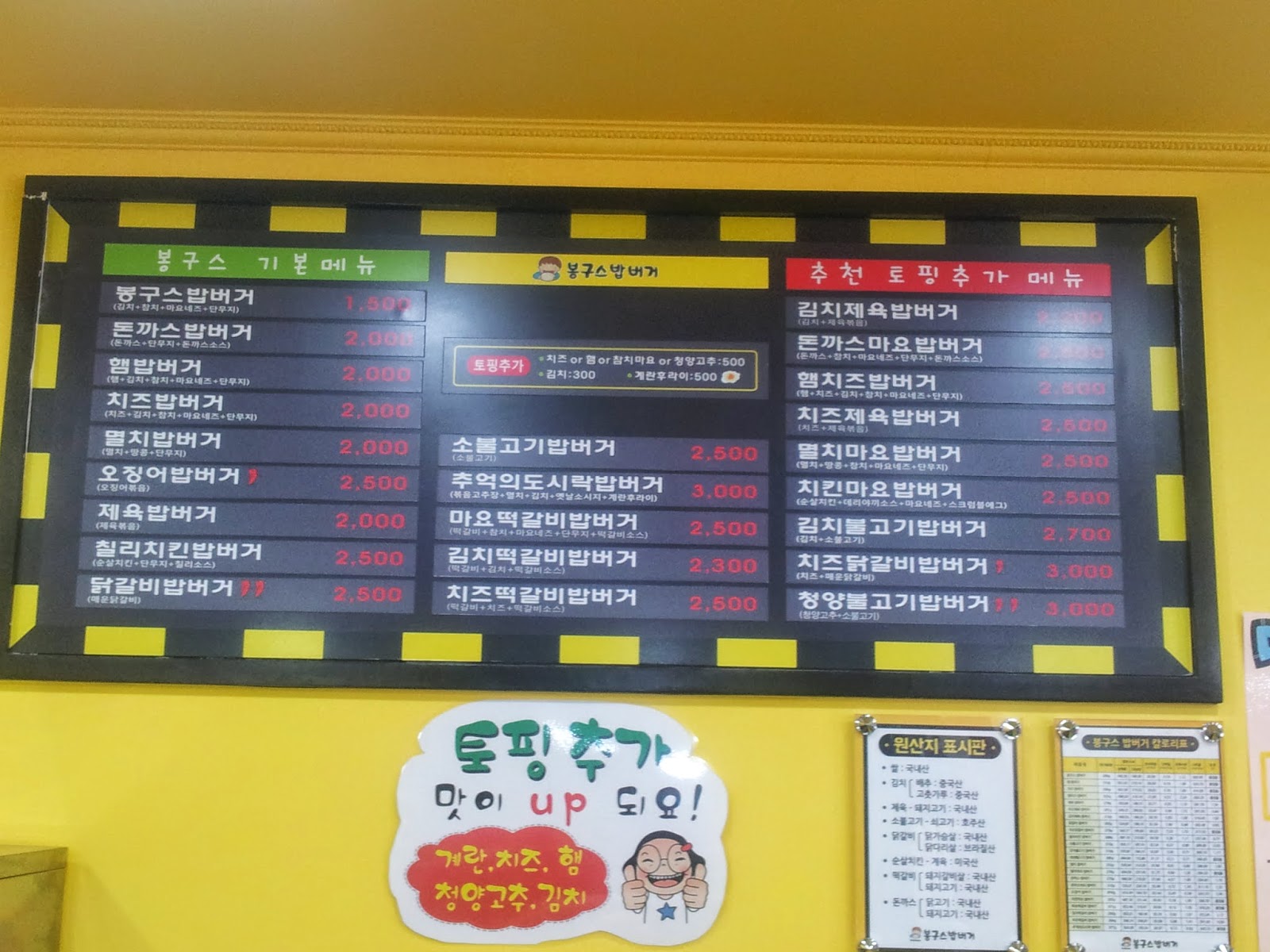 Email ThisBlogThis!Share to TwitterShare to FacebookShare to Pinterest
Labels: All around Daegu, Cheap, Quick meal