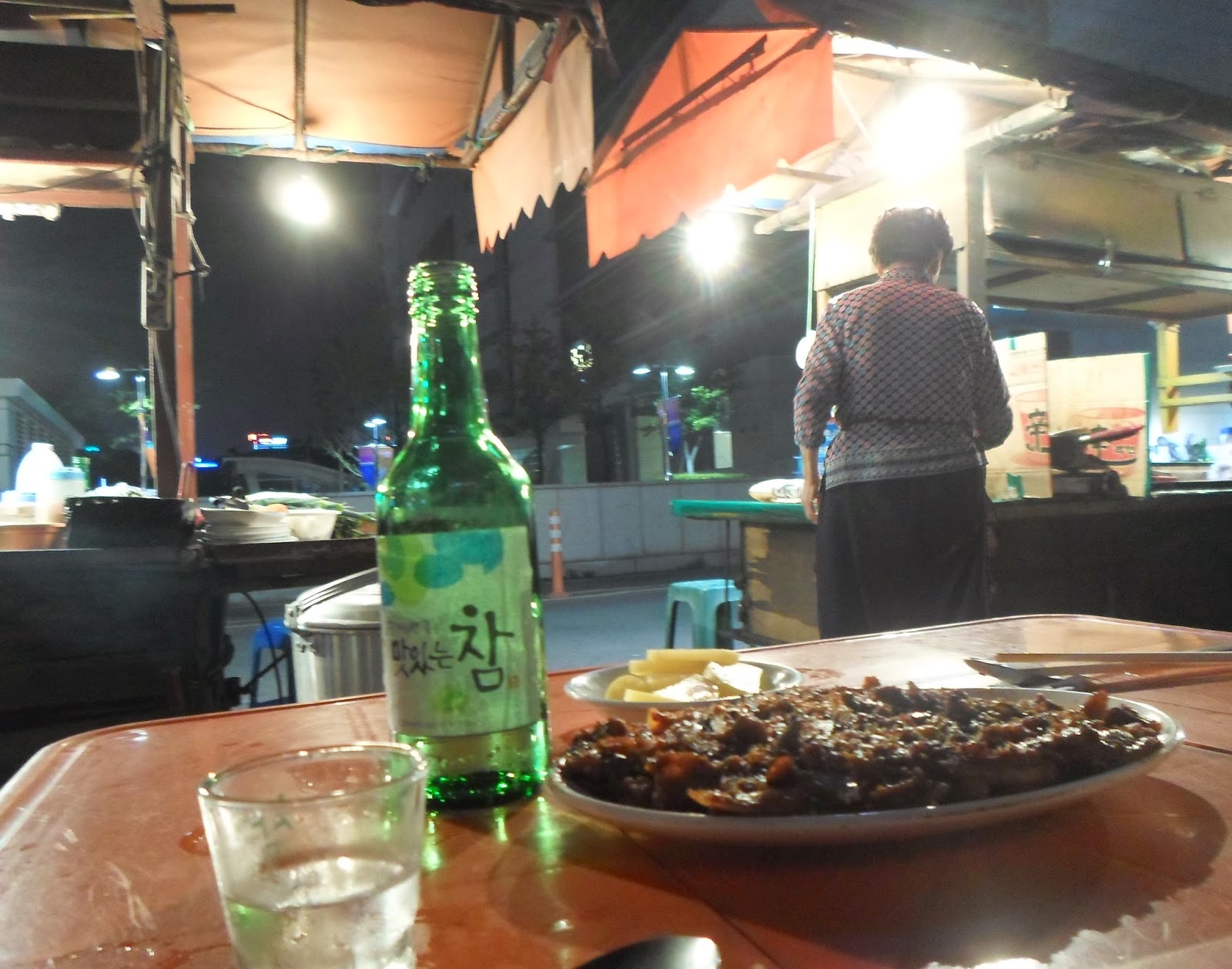 It was a rainy Saturday afternoon.  I was bored and hungry.  The only thing thinner than my wallet was my enthusiasm for the same old bars and restaurants.  It was time for something new, something exciting, but also something affordable.  I conscripted a comrade and drew up plans for an expedition.  Our mission: eat delicious meals and get drunk.  To guide us was a Korean tradition, the art of combining the right food with the right alcohol.  Its name is Anju, and this is our journey to understand it.

According to the weather, makgeolli was our first objective.   We discovered an inexpensive noodle house near Jungangno.  Packed with elderly patrons wise in the ways of Anju, it was the ideal place to learn more. 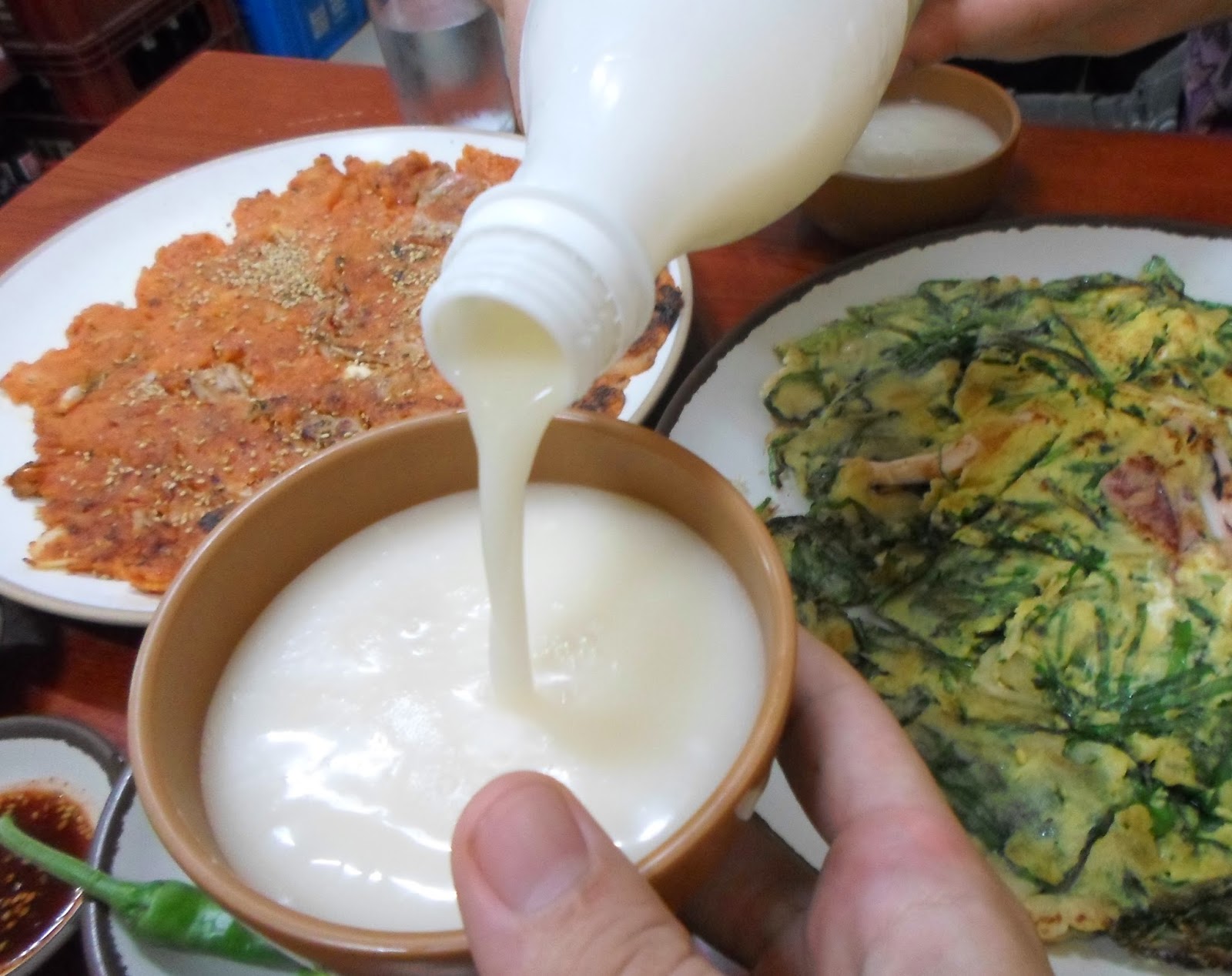 Also known as nongju, or "farmers' alcohol," its traditions are closely linked to the rural lifestyle.  For example, why is makgeolli popular on rainy days?  Because farmers would stay home and drink when poor weather prevented field work.  Why is makgeolli popular after hiking?  Because mountains and farmlands are often neighbors.  (Plus it helps circulate blood through a hiker's sore muscles).  Clearly of agricultural origins, makgeolli is fermented from rice or wheat, and often flavored with produce like apple, corn or bean.   For this veggie alcohol we needed a veggie Anju:  Pajun (battered and fried spring onions).  It's soft, salty and meatless, the perfect Anju for the smooth, milky makgeolli. 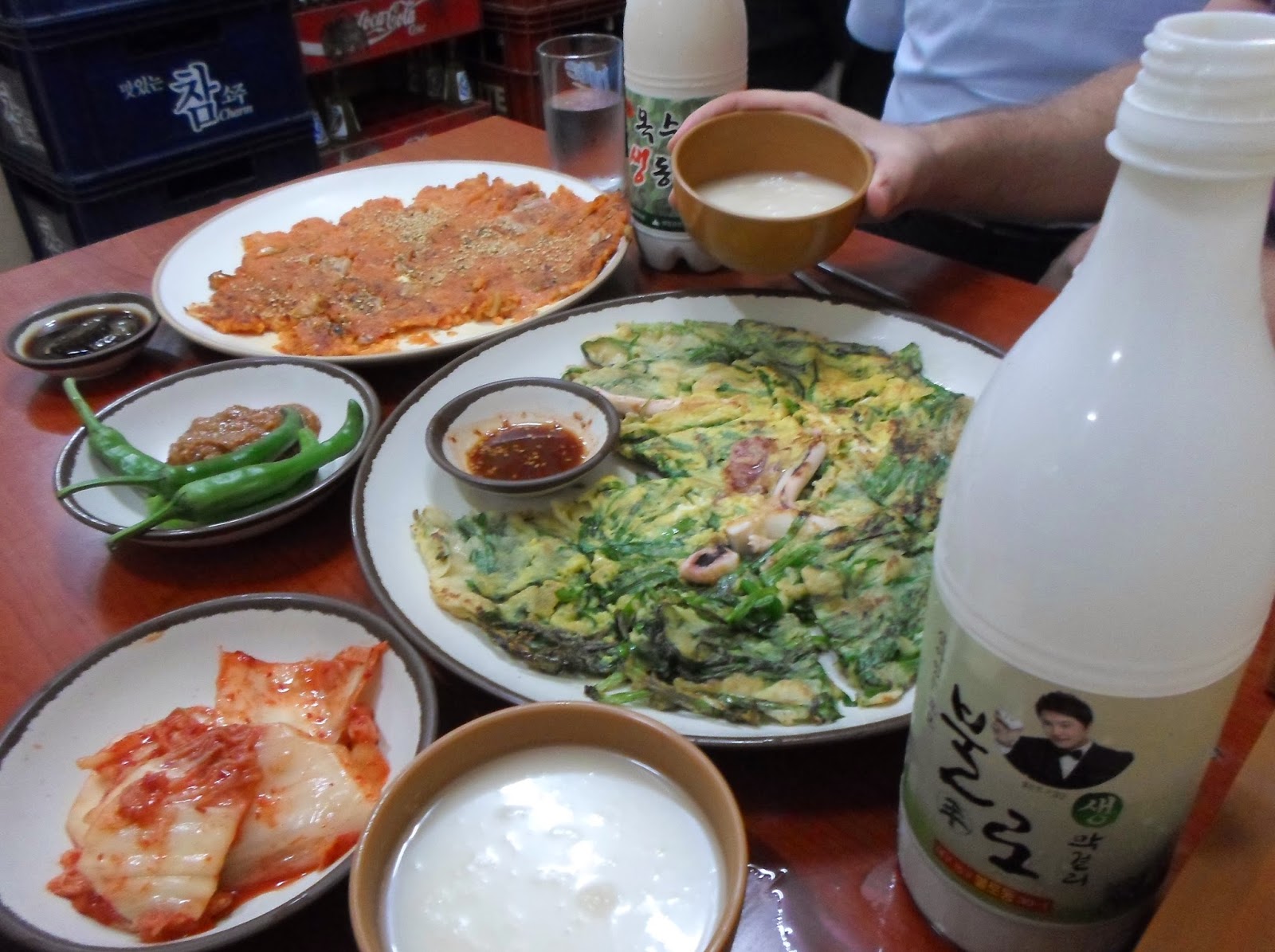 As the rain passed we continued our drunken journey.  Our second objective was beer.

Unlike the indigenous makgeolli or soju, many still consider beer a western influence.  So when under such an influence, western-style Anju is ideal.  Breaded, crispy and fatty foods are beer beneficiaries.  The carbonation can wash down a mouthful of chips; the slight acidity can dislodge a greasy pizza.  An icy beer is the ying to a fried chicken's yang. 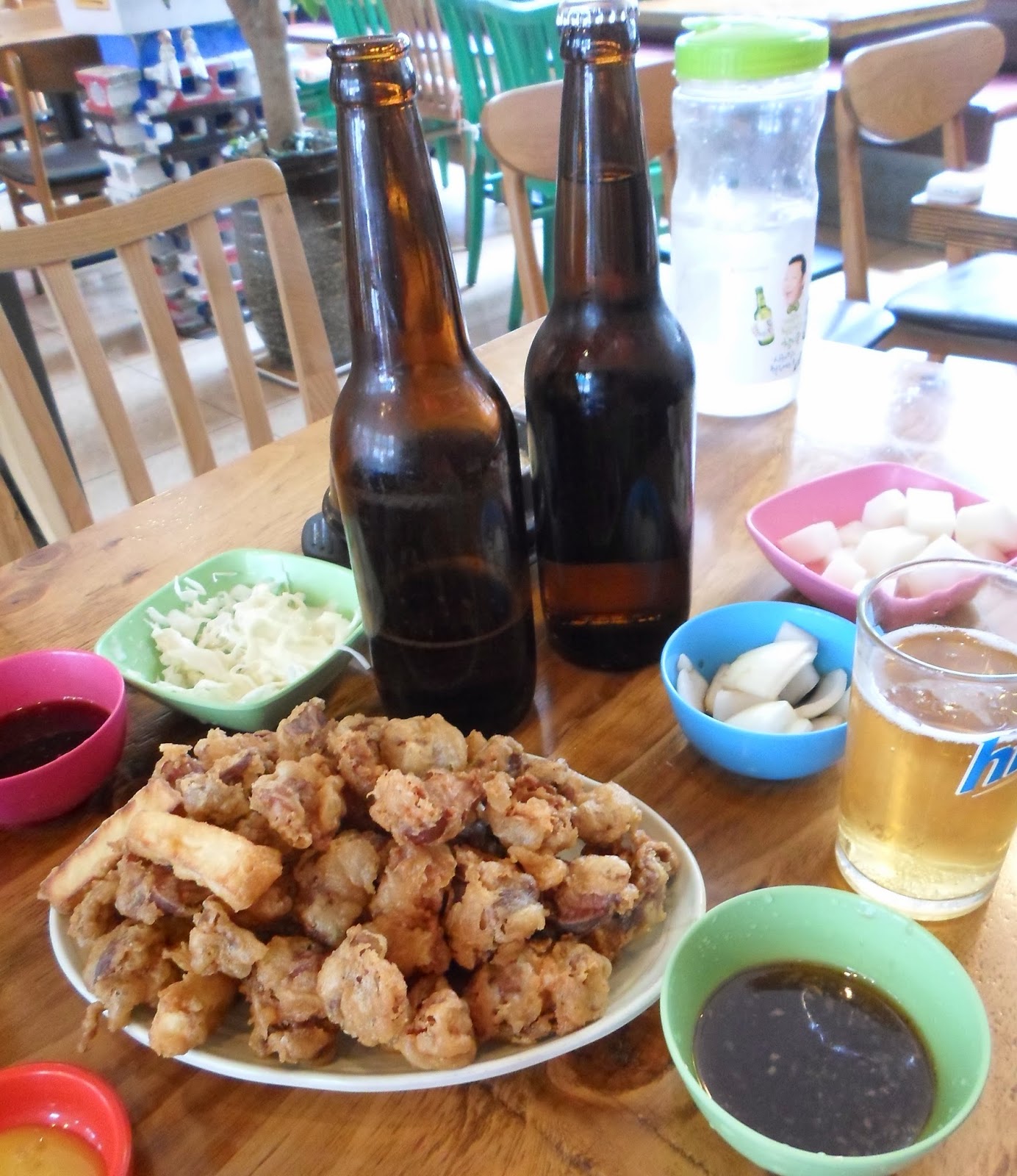 So we decided to balance our Chi with Chimek (chicken & mekju) and headed to Dalk-ddong-jeep Alley.  Just northeast of Dongdaegu Station lies this officially-designated "city treasure," a block of restaurants specializing in fried chicken gizzards.  As we drank our Cass beer from Hite glasses, we wondered about beer in Korea.

Only arriving in the early 1900's, it turns out Korean beer is still in its infant state.  Well more like a state of infants being stomped out by two bully teenagers; Hite-Jinro (Hite, Max, and Dry Finish d) and Oriental Breweries (Cass, OB, Cafri, and Budweiser) dominate the industry with their bland and mass-marketed labels.  Although there has been hope since 2011, with the relaxation of laws that restricted distribution from micro-breweries.  But not waiting for that to bear fruit, we resumed our Anju adventure...

Bored of beer and chicken, it was time to spice things up with our ultimate objective: Soju.

This Korean staple has long history of struggle, regarding both external relations and internal organs.  It first poured down the peninsula in the 1200's via invading Mongols, who in turn pillaged it from Persia.  Since then soju has saturated the country, with over three billion bottles sold per recent year.  In the machine of Korean society, Soju acts like industrial-strength lubricant. Sometimes tastes like it too.  That is, unless certain conditions are met, like frosty bottles, warm moods and, of course, proper Anju.

With this in mind we visited soju's iconic home: the pojangmacha. These unregulated street vendors are often shut down by authorities.  Fortunately, next to Daegu Station some of these red-tented relics still stand, and still offer their unique atmosphere. 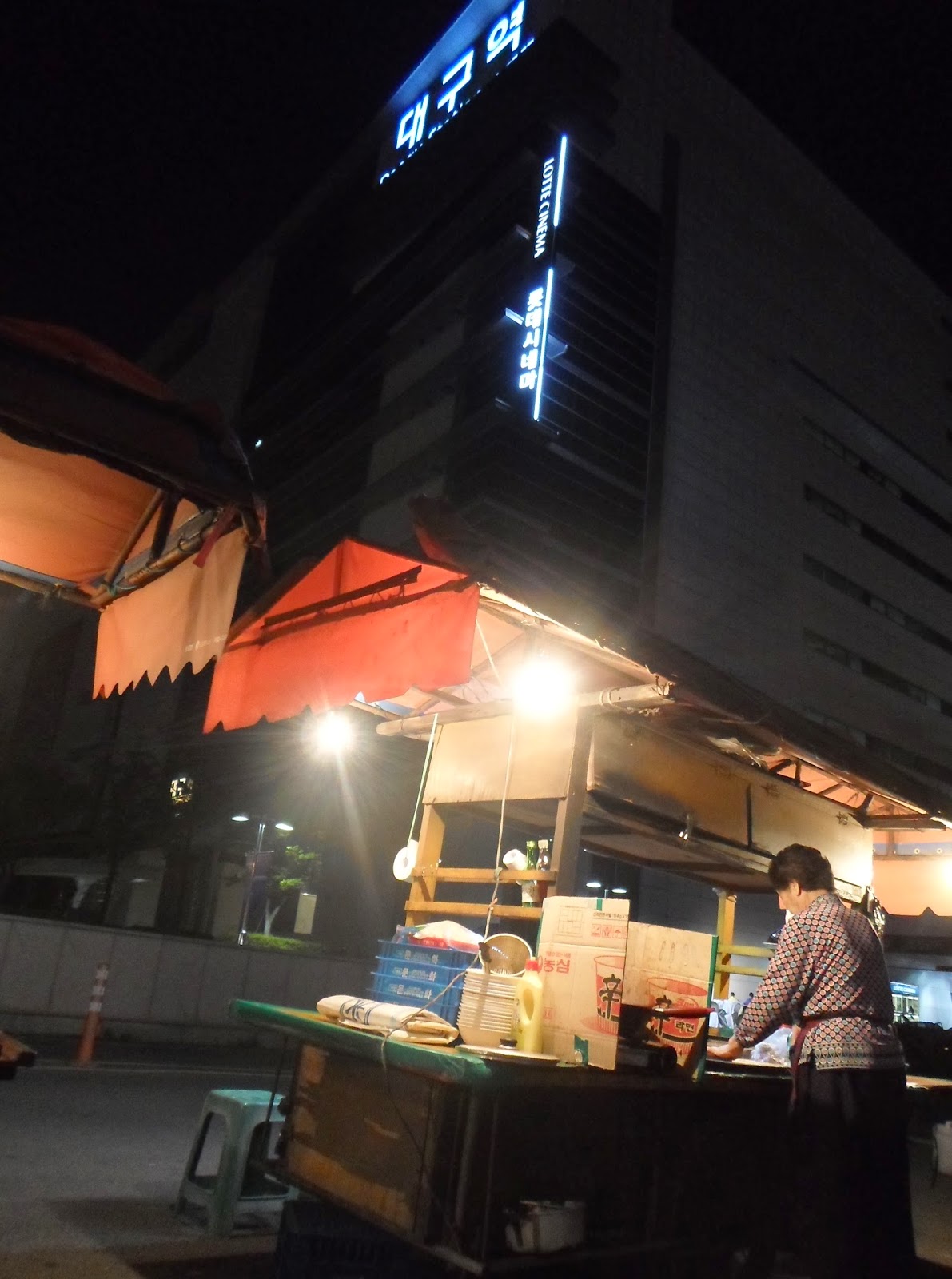 Patrons sat around outdoor tables, contemplating, reminiscing, concealing sorrows with laughs, surrounded by green bottles.  Each crack of an aluminum seal announced the arrival of a new friend, a jester, a therapist, a philosopher.  But soju's greatest role is companion to Anju.  While makgeolli or beer flush away and replace foods' flavor, soju always precedes and enhances it.  For one, a shot of soju cleanses the palette, preparing the taste buds to fully enjoy their next food encounter, hence soju's popularity alongside delicacies like raw beef or certain seafoods.  Conversely, since soju can be harsh on the unfamiliar or sober, following a shot with spicy soups or marinated meats provides a tasty chaser. 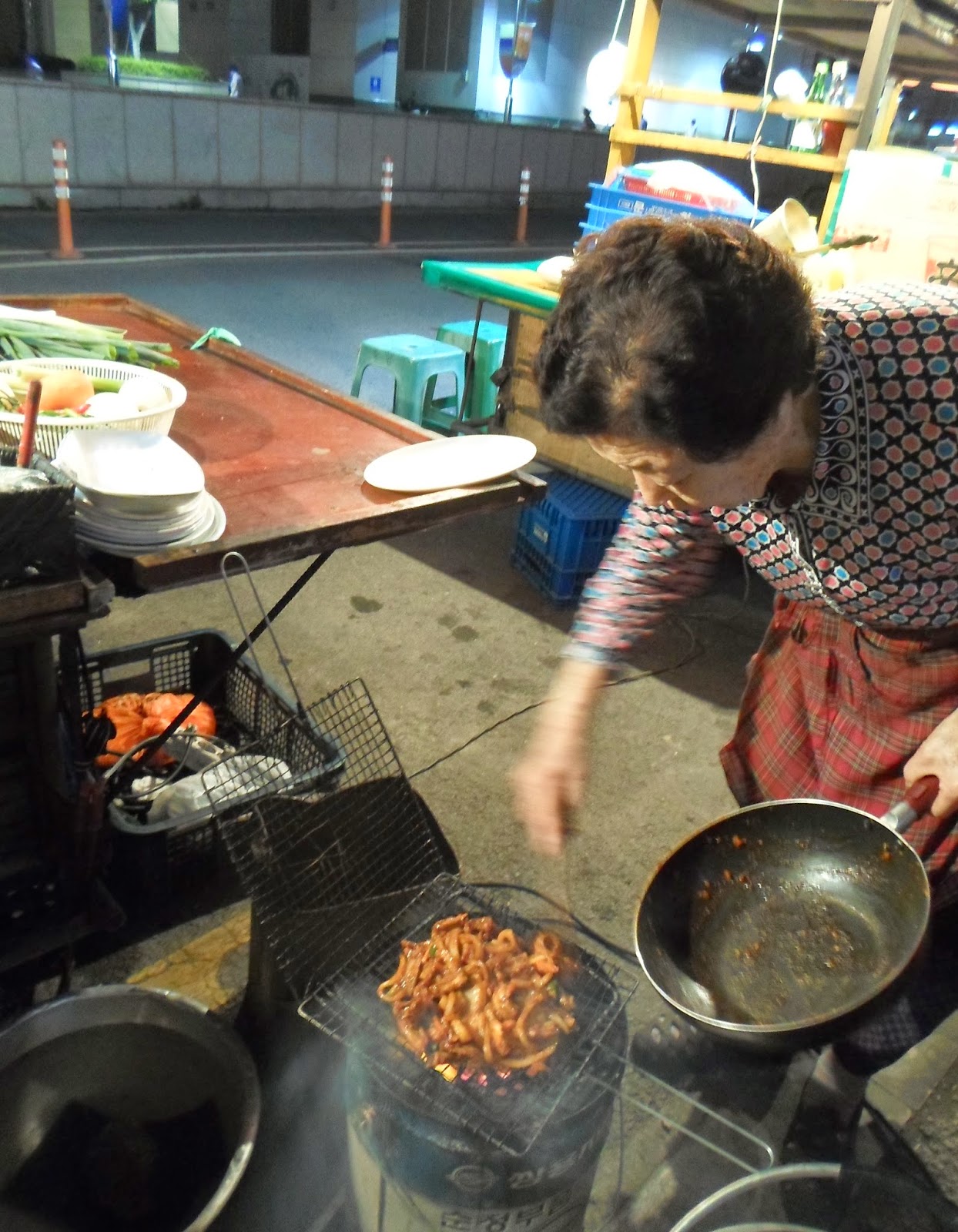 Meanwhile, the friendly ajummas at our pojangmacha were Anju authorities.  Their menu offered the perfect compliments to soju, such as bulgogi, chicken feet and mackerel.  We decided on gomjangah, or spicy eel, a classic Anju and a satisfying conclusion to our journey.

Overall, our Anju expedition was successful.  It was far more fun than an average evening, and only cost ₩19,500 each.  Full, drunk and knowledgeable were our goals.  It's safe to say we achieved at least two of them.

This blog embodies an appetite for knowledge and cross-cultural respect.  It is hereby dedicated to Mark Edward Waugh, a purveyor of such a spirit, an expedition conscript and a friend for life.