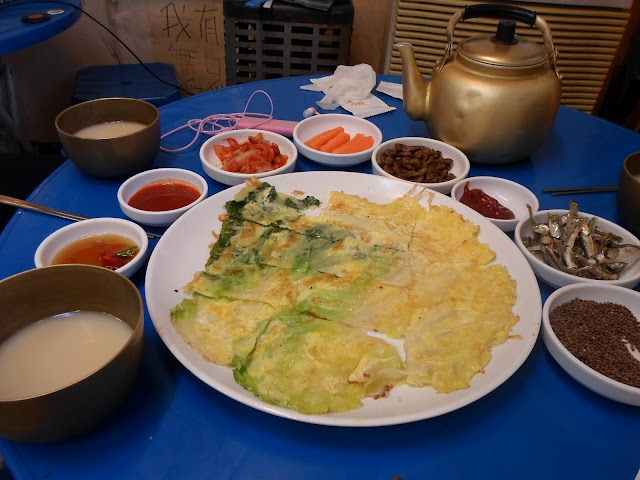 A great honor for Korean restaurants is to be known as a "mat-jip" (맛집).  This unofficial title translates directly to "flavor house," but has a much deeper meaning.  Such a title is reserved only for a select few restaurants, those that are popular, that have survived many years, that usually specialize in a specific dish, and generally do it better than elsewhere.

Here at Dong-Gok Drunken Rice, their specialty is Makgeolli, and common dishes that complement it.  These include Jeon (battered and fried vegetable "pancakes"), tofu & kimchi, and various seafoods.  [See below for translated menu and pics of recommended dishes.] 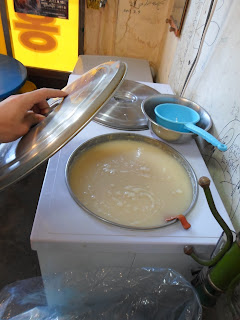 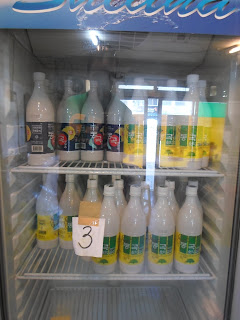 For \5,000, order a kettle of makgeolli, which equals two bottles or around eight bowl-fulls.  Especially when drunk from cold metals bowl such as these, makgeolli is extremely refreshing, possibly addicting to some. 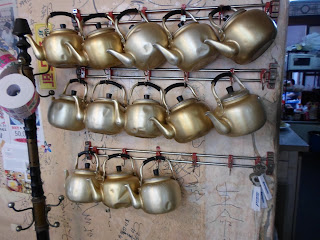 As for the restaurant's name: "Dong-Gok," is a region in the southeastern corner of the country where this style of makgeolli originated; and "Drunken Rice" is another name for makgeolli, the winner of a contest held by the Korean Ministry for Food, Agriculture, Forestry and Fisheries to determine makgeolli's international name.  But with "Korean rice wine" being a clearer and more modest term, "drunken rice" never really stuck anywhere, except to the front of this building. 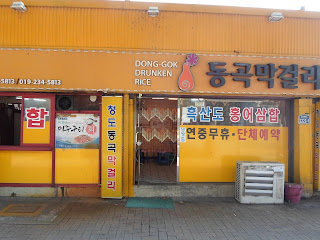 Food:
According to the Korean tradition of Anju (안주), alcohol should not be consumed by itself; it must be accompanied with food-- specific types of food depending on the type of alcohol.  So in the case of smooth and milky makgeolli, seafood and veggie dishes with milder flavors are most common.

* Dishes pictured above.
--Check out my page on how to order in Korean--

Atmosphere: Dongguk Drunken Rice is a quaint little place with a warm and friendly feeling.  There are about 10 tables inside and 6 more in the backyard.  It's a well-known 맛집 with a long history.  So there are a steady stream of patrons, especially on weekends and rainy days. 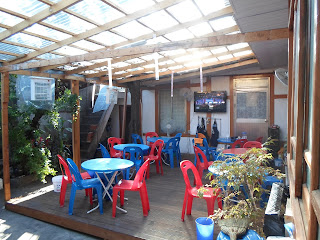 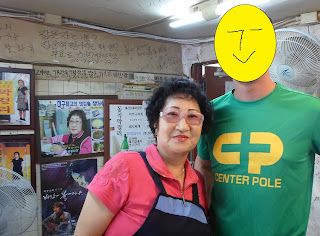 The lady proudly showed off her wall of fame, which included newspaper articles and memorabilia of her and her restaurant.  She also showed off some notable signatures on her wall, including a North Korean (pictured above fan), some Japs, and other foreigners.  We had to leave our mark as well (pictured above TV). 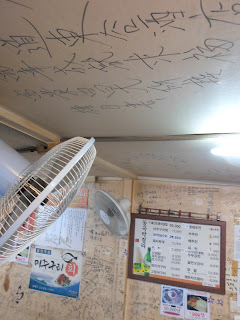 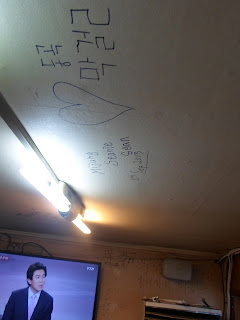 It's also right around the corner from Kim Gwang-Suk Alley (김광석 골목), a long walkway of paintings and sculptures dedicated to the late guitarist.  The Alley is definitely worth taking a several-minute stroll.  Also located nearby is the DIY bibimbap place we've checked out a while back. 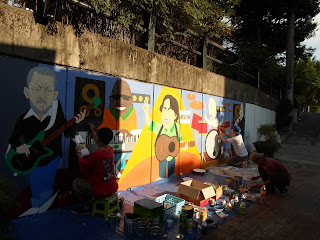 [The nearby 'Kim Kwang-Seok Alley' can be seen via Safpics...master of the Korean pic blogs.]