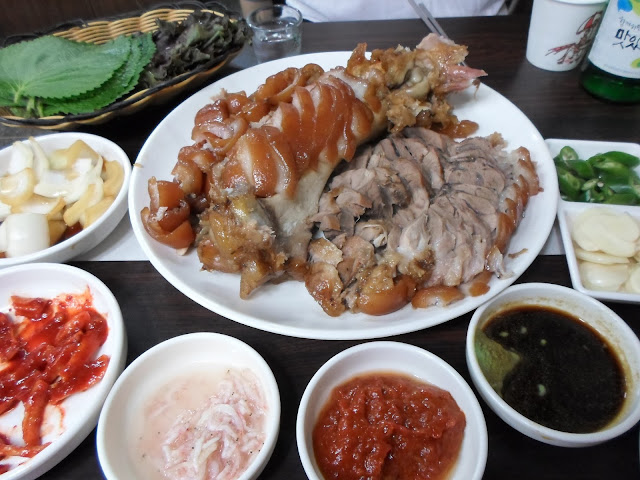 Food:   Jokbal (족발) was the subject of an RDR investigation a few months back.  The search led to Seonam Market (서남시장), the site of Daegu's famed Jokbal Alley.  We stopped at a random Jokbal (족발) vendor to learn about the preparation methods and rejuvenating health benefits.

But recently we went back to find the Alley's the most delicious Jokbal.  For more than 25 years the best-known vendor, Kim Ju-Yeon, has been perfecting their dual-flavored dish: with the tender, juicy meat bordered by gelatinous skin.  Perfectly complimented by sides of salty shrimp, sweet kimchi and spicy wasabi, Kim Ju-Yeon's King Pig Feet is one of the most satisfying meals I've had in Korea.

Mastery of time and temperature is key to their superior Jokbal.  After being boiled and glazed in a cauldron (or 가마솥), the meat's taste and texture may be significantly altered depending on the cooling period.  Choose from three states described on the menu: 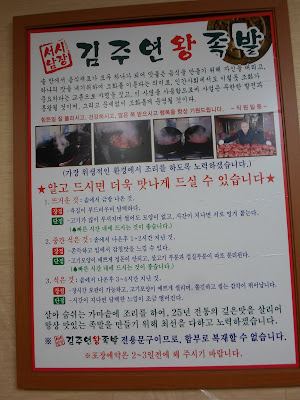 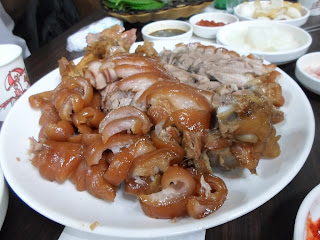 Atmosphere: After dodging merchants through the first half of the market you begin to sense the pork of Jokbal Alley.  Like the other vendors, their front section houses racks of meat and a steaming cauldron.  But inside, Kim Ju-Yeon's King Pig Feet is larger than the other Jokbal vendors.  The first floor is rowed with tables of cooling Jokbal.  The entire second floor is for seating, where drinking and feasting on pig feet is afoot.  With about a dozen tables, it's about three times larger than most competitors. 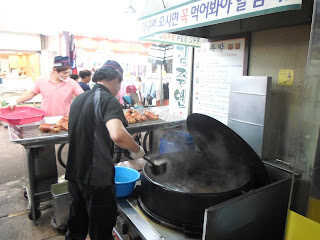 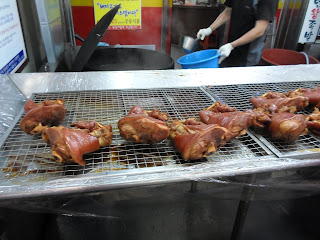 Location:  The original Kim Ju-Yeon's King Pig Feet, in Seonam Market (서남시장), is located a few vendors down from the first place we visited.  Look for the banners boasting of TV-time hanging above their racks of cooked Jokbal.

By subway take the Green Line (line #2) towards the western end of Munyang (문양약).  Get off at Gamsam Station (감삼약) and walk out of exit #1.  You'll see the market entrances on your right. 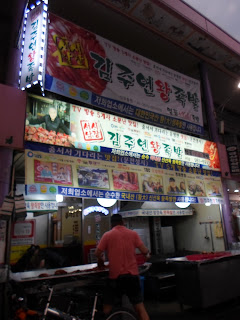 After a few helpful Naver searches, it seems Kim Ju-Yeon's King Pig Feet is now a chain proliferating throughout Daegu.

Check out our Friend: