Five Foods for the Brave


What a pity it'd be, travelling so far just to eat hamburgers or hotdogs or the same boring food of home, only lower quality.  I say leave the pizza and pasta for when in Rome.  Here in Daegu, we are lucky to be surrounded by such amazing Korean cuisine: healthy sides, cheap drinks, fun and delicious table-BBQ.

Unfortunately, some of us may still have a fear of the unknown.  So let's get to know some of Daegu's most perilous platters with 'Five Foods for the Brave,' a countdown to conquering that fear and becoming a true traveler. 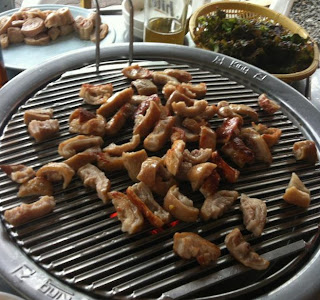 막창 is the end of a pig's digestive system.  It's also the beginning, if the nasty thing eats its own poo.  Regardless, 막창 would've made a higher spot on the list if it weren't so common here.  In fact, 막창 is Daegu's claim to culinary fame.  As a grilled dish it originated here, gave rise to hundreds of restaurants, and won 2nd place for Daegu's most famous foods in a Running Man challenge.

Another reason it only made the bottom spot on 'Foods for the Brave' is because, in my opinion, it's so damn delicious.  Originally turned off by thoughts of chewy pig ass, it has since become my favorite meat.  Just be sure to cut it thin, roast it crispy, and dip it in bean sauce. 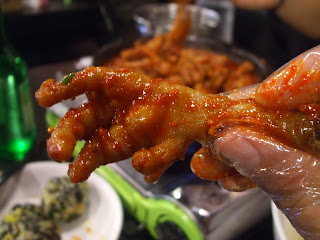 닭발 is the lowliest body part of the lowliest animal on the menu.  Try not to think of all the feces and dead comrades the feet stepped on while members of a living chicken.  Just put on some plastic gloves, grab a leg, bite off a toe, suck off the skin and tendons and spit out the bones.  After one or two, the ultra-spicy sauce may set your mouth ablaze.  So take a break and order some 쿨피스, or yogurt juice, to douse the flames.  I found myself numb to the pain after several rounds.

If you can't handle the boney melee, try 닭발 of the bite-sized variety.  You can usually order them 무뼈 or 뼈없는 (boneless).  Also, this smaller type is grilled rather than stewed, allowing you to counteract their toenail and cartilage textures by cooking them extra crispy.

Recommended Locations (downtown): For the large, legged style, try 한신포차 next to Thursday Party 1.  For the smaller, boneless style, visit 온달포차, the red-tented shack past Caliente.

Raw beef restaurants may offer you a new experience and a delicious plate of fresh meat.  But the honor of the #3 'Foods for the Brave' goes to a side-dish duo that's served at such places.  First is 천엽, meaning raw stomach, specifically the 3rd of a cow's 4 stomachs.  It has the appearance of a grey bath towel and the texture of an old rubber band.  천엽's redeeming quality is how it tastes: like nothing, or the 기름장 (sesame oil with salt) you dip it in.  Second is 생간, meaning raw ("fresh") liver.  These blobs of blood dissolve in your mouth like moist tofu.


But before you encounter these 'Foods for the Brave' you'll need to order a main course.  Raw beef restaurants usually offer two styles: 생고기, fresh meat slaughtered and served the same day; and 육회, meat frozen for a day, marinated, and served with an egg yolk and pear slices.  Just be sure to visit a reputable restaurant that abides by Korea's strict beef-control regulations and doesn't serve deadly bacteria.  I'd also consider popping some anti-parasitic pills afterward. 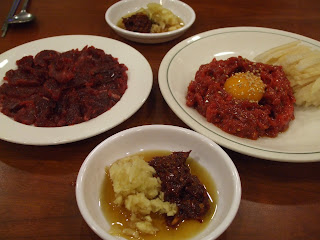 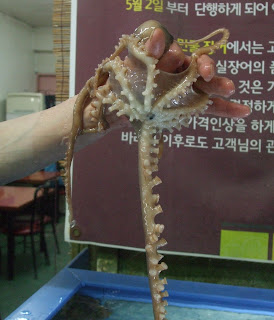 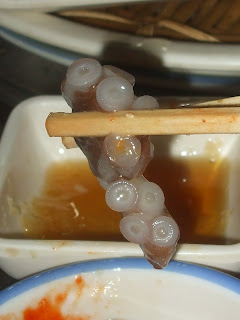 "Live" is a loose term here considering it's completely dismembered and its head discarded.  However, octopi have complex nervous systems with arms programmed to act independently of the brain.  That explains all the chaos slithering around on your plate!  Some pieces attempt to escape and reunite with the Mothership, others cling for what's left of their dear life, suctioning to the plate, your chopsticks, or the inside of your mouth.  There have been cases of vengeful octopi choking consumers.  Don't let these intelligent creatures outsmart you, dip them in sesame oil to nullify their suction power.  They may not offer much in terms of flavor, but if eaten soon after slaughter they allegedly provide health benefits.  These include stamina for humans and resurrection for dying cattle, according to our chef.  Furthermore, I found the required chewing to be an effective jaw workout.

Firstly, I must acknowledge that eating dog is controversial in South Korea.  Seeing dogs as friends rather than food, younger generations tend to oppose this ancient tradition.  I agree that it's totally wrong to eat a dog, just like it was totally wrong to eat the four other animals killed in the making of this article.  But my purpose here is to share information as it stands, not promote it, but not deny it either.  So relax, learn and please don't go barking up the wrong tree. 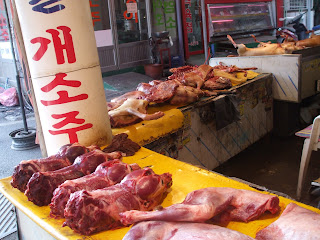 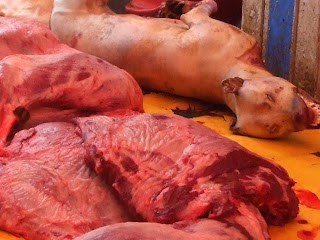 If you've ever ventured into the depths of Chilseong Market you may have seen angry dog carcasses sprawled across tables.  Here lies the source of the two main critiques: health risks to the consumer and inhumane treatment of the livestock.  First, market dog meat may spoil after hours of unrefrigerated, open-air exposure.  Second, opponents warn of its dubious origins, such as revenue-seeking animal shelters rather than farms, or it being slaughtered by hanging and beating rather than electric shock.  So here's a disclaimer for trying dog meat in such an uncertain and unregulated setting. 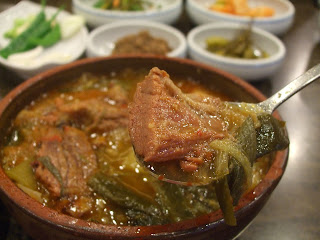 To hopefully minimize these concerns, a large, fancy restaurant in Bukgu was the chosen destination of me and a friend (the only brave friend out of the half-dozen I invited).  We ordered the 보신탕, or "body nourishing soup," which allegedly balances the body's Chi with its abundant nutrition.  There seemed to be quite a bit of Chi-balancing going on among the few elderly couples present, except for a fellow scarfing down skin slices and gnawing on leg bones.  I was nervous as the lady wheeled up our soups.  At first glance it appeared similar to 해장국 with its red broth and veggies. But the meat, from the dog's legs according to the lady, had the stringy structure of chicken breast but the soft tenderness of pulled pork.  I've heard dog meat smells awful, but all I could smell was the mound of chopped garlic, black pepper, and spicy oils.  This made a distinct flavor difficult to identify. I eventually freaked myself out with thoughts of something evil concealed behind the overload of spices and wasn't able to eat much.  But it's certainly edible (my friend nearly finished his).  Just like the other 'Five Foods for the Brave,' it must be an acquired taste.  But unlike the others, I don't plan on giving myself another chance to acquire it.


[Download the pdf of the Compass issue (June 2013), with original article, here.]