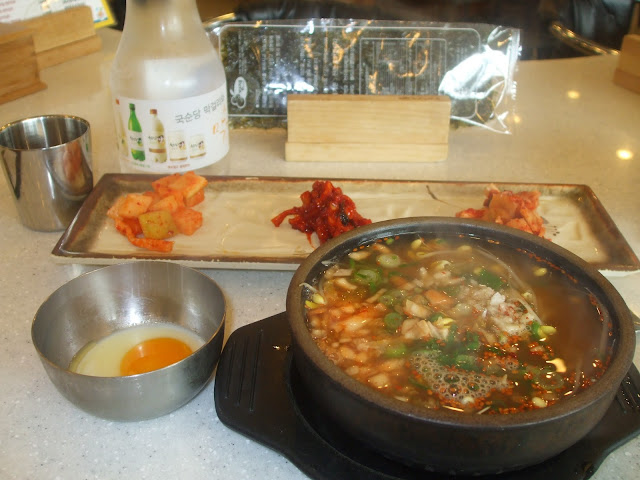 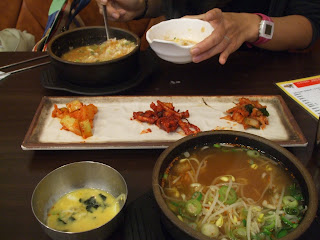 The Soups: When we hear "Hangover Soup," or 해장국 (Haejangguk), we tend to think of the red spicy broth with pork spine meat (a.k.a. 감자탕, or Gamjatang) like this.  Its spiciness may feel soothing to the stomach.  However, this variety of  해장국 doesn't actually provide any special relief for hangovers, and may only irritate an alcohol-filled belly in the long run.


Enter 콩나물국밥 (Kong-na-mul-guk-bap), the real "Hangover Soup."  The name refers to its abundance of bean sprouts (콩나물), and the fact it's a soup (국) that has rice (밥).  In addition to vitamins and nutrients that are essential in the battle against a hangover, bean sprouts are loaded with a potential secret weapon: asparagines.


While the exact biochemistry behind hangovers is still uncertain, among probable causes is acetaldehyde, a toxin produced when the liver metabolizes alcohol.  According to some South Korean researchers, asparagines (the amino acids from asparagus) help reduce such toxins.  These recent findings (2009) haven't quite been scientifically accepted yet.  But the theory has been in the making for decades, with hangover remedies patented as early as the mid-90's.  Now there are even Soju brands paradoxically offering asparagine alcohol. 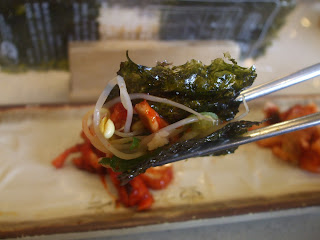 Asparagines aside, 콩나물국밥 does have some definite claims to the title of "Hangover Soup."  While shitfaced, people tend to piss away their electrical conductors, such as sodium and potassium.  This diminished spark weakens every muscle and organ, since the nervous system uses electricity to operate them. Therefore, athletes and alcoholics alike should replenish electrolytes by consuming Gatorade and, if possible, Bean Sprout Soup.

The final benefit of bean sprouts is they're rich in water and fiber.  These inspire bowel movements, which help dump toxins before the intestines have time to absorb them.

1) 전주남부 시장식 콩나물국밥 (Junju Southern Market Bean Sprout Soup)
Named after its birthplace, the Junju Bean Sprout Soup is their primary style. It's served warm and with an egg in a separate cup.  Just add a few spoonfuls of soup and some 김 (seaweed), according to the helpful descriptions on the wall and menu. 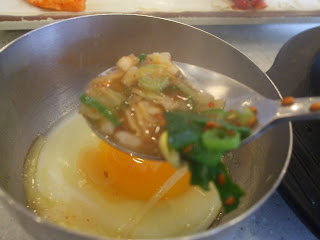 This variety is a similar style to #1, except it is served steaming hot, and has the egg mixed in rather than separate.

Both soups are choc-full of rice and veggies, especially the life-giving bean sprouts.  While they have a slight spiciness, they're heavily water-based and taste somewhat bland compared to other soups (such as a thick 찌개 (jjigae)).  Both are \6,000. 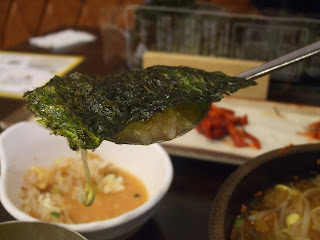 Now for that package of 김 (seaweed) on your table, the menu offers advice for that too.  With a spoonful of your soup, place a sheet of 김 on top and enjoy its salty flavor and transformative texture.  Also on your table is the mandatory plate of 깍두기(kimchi'd radish cubes), 무말랭이 (dried radish pickles), and 김치 (kimchi). 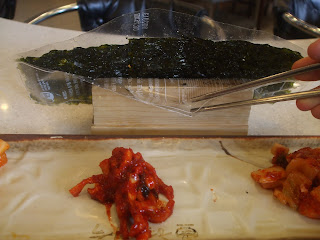 They offer other dishes, such as the common 비빔밥 (bibimbap).  Add rice and 고추창 (pepper paste) and mix them into your bowl of veggies. 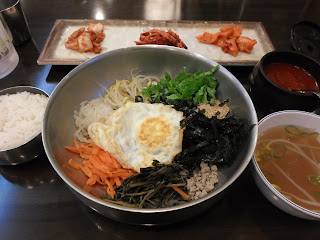 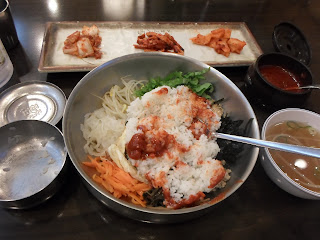 Now what good is a hangover prevention soup if your not drinking alcohol in the first place?  Instead of misusing the word ironic, let's recognize the brilliance in such a business model.  It's like Dr. Kevorkian running a funeral parlor. 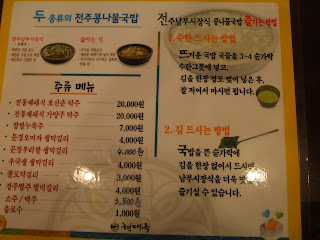 The first two items on the 주류 메뉴 (alcohol menu) are some expensive types of traditional wine that are rare and I've never tried.  The last item is 음료수 (soft drinks) and above that are the essentials: 소주/맥주 (soju/beer).  But most of them (#'s 4-8) are different types of 막걸리 (Makgeolli), the popular Korean rice wine.  According to Korean customs, and probably law, you must have food to go with your alcohol. So 막걸리 goes well with their soups or their other non-meat dishes, such as 파전 (spring onion pancake), 비빔밥 (rice and veggie mix), or 두부김치 (tofu and kimchi). 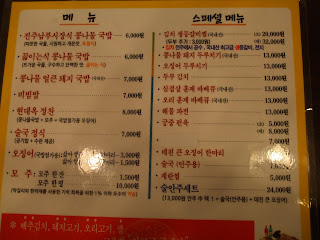 For Soju drinkers, the right side of their menu is the 스페설 메뉴 ("special menu").  These items are traditional 안주 (anju), meaning food to much on while getting drunk, Korea's national treasures.  These include 삼겹살 (pork belly), 갈비찜 (stewed meat and veggies), and different styles of 오징어 (squid).  The last item is the 술안주세트, or "alcohol snack set" for \24,000  It includes a whole squid, a 술국 (literally "alcohol soup," but meaning a soup that chases alcohol well), and your choice of one of the \13,000 dishes.

현대옥 is large, with about 20 tables, a floor seating area and a wrap-around bar in the center.  None of the tables have grills though, so it's not your typical Korean BBQ setting.  I think in general the restaurant is more popular for mid-day meals, not so much for nighttime drinking, despite being open 24 hours.  It's seems too clean, well-lit and non-smokey for night dwellers.

However, as their menu testifies, drinking is certainly encouraged here.  You can sample their alcohol selection while snacking on chasers, and then order a Bean Sprout Soup.  This is an exercise of the mind: incurring a hangover at the same time as preventing one, which some call "Schrodinger's Hungover Cat." 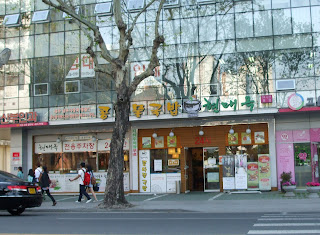 Location
It's located across the street from 경북대학교병원 (Kyungpook University Hospital), on its west side towards 삼덕 (Samduk).

By subway, take the green line (line #2) to 경북대병원역 (Kyungpook Hospital Station).  Go out exit #1, make a sharp right turn at the top of the steps.  It's two or three blocks down on your left. 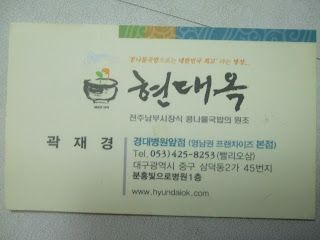