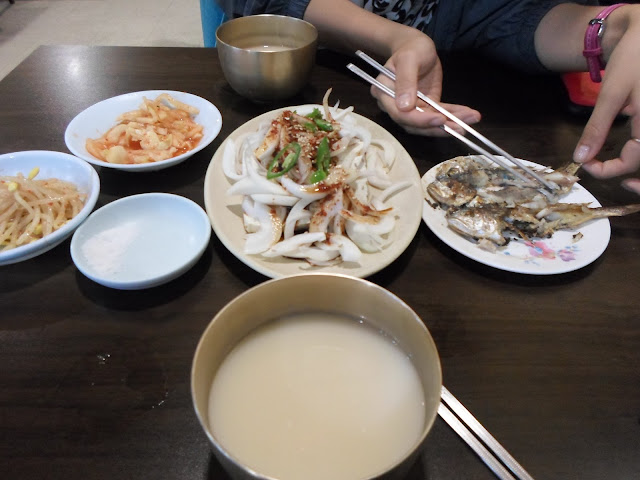 It was a rainy afternoon in Daegu.  In accordance with Korean custom, 막걸리 was our drink of choice.  To find out more about the story of this delicious, milky rice wine, we visited a restaurant named 남산동 도루묵. (Here we also learned the story of the King and the Mediocre Fish (see below))

Over Korea's long culinary history, many food customs originated out of practicality or necessity for a certain demographic, but survive today mainly for tradition's sake.  막걸리 on a rainy day is a perfect example.  In past centuries society was more agricultural and a greater portion of the economy was dependent on the deeds of farmers.  But on rainy days farmers couldn't work the fields.  Instead, what else to do except stay home and get drunk.  It just so happened that in these rural farmlands 막걸리 was the widely produced and available drink of choice.  Hence the tradition of 막걸리 on rainy days came to be. 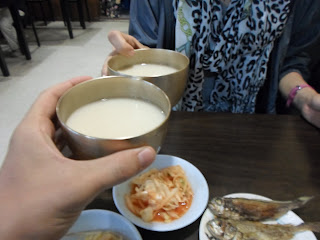 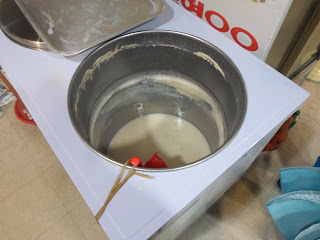 Their 막걸리 sits in a massive tank near the kitchen, and for only \1,000 you get a bowl full.  The bowls are metal, which helps keep it cold in hotter months.  The metal also seems to improve the taste immensely, in my opinion.  A great and unique quality is, unlike most other restaurants, the owner will allow you to drink without making you order food.  Some patrons even brought snacks from outside! 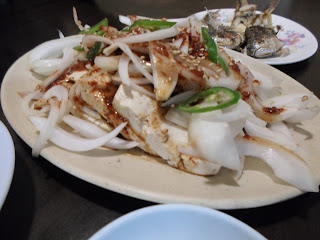 But if you do decide to order food, 남산동 도루묵 offers a few dishes.  Also according to Korean tradition, certain types of food are eaten along with certain types of alcohol, such as chicken with beer, or spicy soups and pork with Soju.  With 막걸리, vegetarian dishes and salty soups are complementary.  They offer two types of 찌게, or thick soups, as well as 오뎅탕, which is a fish-cake broth.  We ordered the 양념두부, tofu with sauce and onions.  We've had this dish many times before, usually with 막걸리 after hiking (another Korean tradition), but we enjoyed it here more than any other place.

Another notable feature of 남산동 도루묵 is their mediocre fish.  These small river fish are given as free snacks with any order, including only \1,000 막걸리.  I call them mediocre because they are bland, bony and have very little meat.  And according to legend, they have ultimately been declared so by the highest authorities.

The King and the Mediocre Fish. 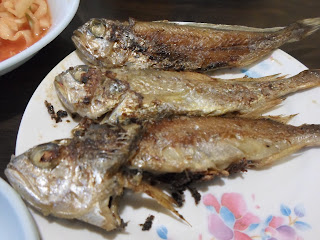 Centuries ago, during some general period of history or another, an ancient king was marching along on a campaign trail.  (I mean a military campaign, not election campaign.  You don't vote for kings.)  Anyway, after many battles the king and his army had exhausted their rations and were in desperate need of aid.  A small village granted the king hospitality.  But the village was poor and had little to offer except these river fish, which the villagers referred to as 묵어 (moog-uh).  The starving king was amazed by these morsels.  Claiming it was the most delicious thing he had ever eaten, he said they were worthy of a more beautiful name and thenceforth declared them 은어 (eun-uh), meaning "fish of silver."

Years later, during times of peace and plenty, the king longed for his favorite fish once again.  So during a banquet he had some "fish of silver" delivered to his mighty castle.  Upon finally reuniting with their flavor he said, "uuhhhh, actually, they're not that good."  He re-declared their name to be 도로묵 ("back to moog"), the name they keep to this day. 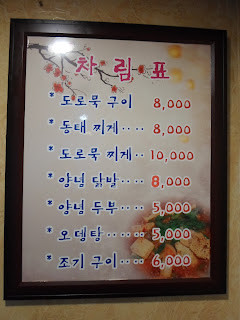 I'm clearly no salesman, but if you're interested in a massive plate of these mediocre fish, you can order 도로묵 구이 for only \8,000!  Otherwise, just try a few for free.

[Their menu is missing one thing, the quintessential 막걸리 companion: 파전 (pajun), or vegetable pancakes.  For this, we continued our rainy-day drinking at another cheap and local place, a favorite of ours: the cheap noodle house.]

Atmosphere
On our rainy day, 남산동 도루묵 was packed with elderly folk pounding back bowls of 막걸리.  Everyone was enjoying themselves, with most tables engaging in a loud community discussion.  One patron was a nearby market vendor and began auctioning off his veggies at discount prices.  They seemed very surprised to see a foreigner in such a back-alley restaurant.  But as with any case, positive attitudes reciprocate and they were very friendly.  Taking an interest in the traditions and history around me also seemed to garner some appreciation. 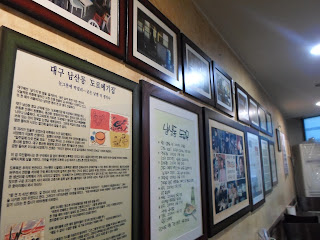 The restaurant has about 8 or 9 tables, and an open bar-style kitchen in the front.  It's quite clean and modern, and judging from photos on the walls it must have undergone some serious renovations over the years.  Their walls boast other memorabilia from the restaurant's long history, such as news reports and the owner's stories.  One reminisces of soup that now costs \6,000; it first cost \100 over 50 years ago. 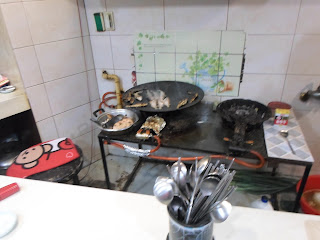 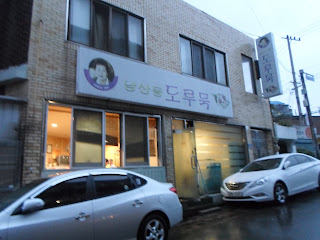 From Myeong-Deok Station, walk out of exit #3 and walk straight 3 minutes.  Just before you reach your first major intersection (남문시장 서거리) take the alley on your right.  It's a few stores down on your left, towards the end of the alley.

From Banwoldang Station, walk out of exit# 2.  Just after your first major intersection (남문시장 서거리) take the alley on your left.