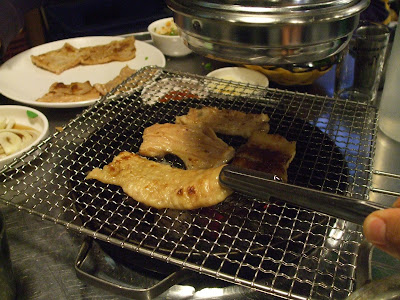 Food
막창 (makchang) means "end of intestine."  I was confused for a while, thinking this meant appendix (which pigs don't even have) or the cecum (which is more of a detour than an end).  After some research and confirmation from the Korean Institute for Animal Product Quality Evaluation, I learned its true identity: rectum.  But don't worry, butchers turn it inside out and wash it and restaurants usually boil or pre-cook it, effectively purging any pigshit.  After being grossed out from my first (and chewiest) attempt 3 years ago, it quickly become my favorite BBQ meat.  I find it delicious to the point of addiction, as long as I'm cooking it crispy and eating at great restaurants like Banyawol Makchang. 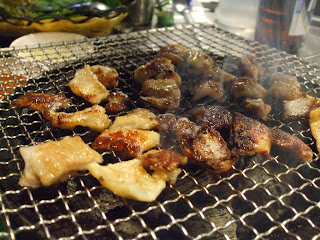 The success of Banyawol Makchang lies in their preparation methods.  First, they claim their meat is 생 ("fresh"), or straight from the butcher and never frozen.  Second, this place cuts the rectal tubes long-ways into flat sheets, rather than side-ways into rings.  This allows for thinner pieces that can be cooked crispier.  This also helps with aesthetics, as pieces tend to lose direct resemblance to assholes.  Third, preparation includes a quick scorch with a blowtorch.  Aside from easing the grilling process, this spares you from having to handle it in its natural, squishy asshole state.  For an extra thorough crispiness, pieces can be cut thinner along their width, like slicing a book into two volumes: 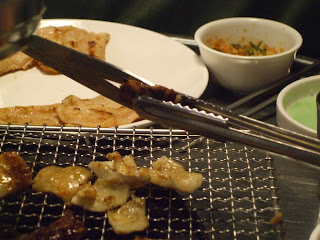 Another factor  in Makchang's deliciousness is the sauce.  It's the orange stuff made of bean powder, bean paste and pepper paste.  Also mix in some diced 파 (spring onion) and 고추 (hot pepper). 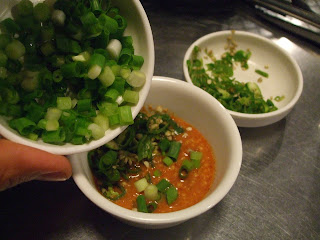 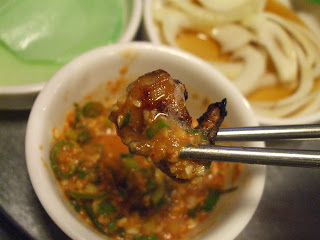 If you need to further conceal your rectum, wrap it in a 상추 (lettuce leaf) with some 양파 (onion) and 마늘 (garlic). 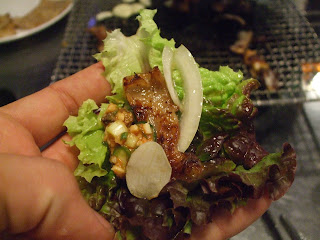 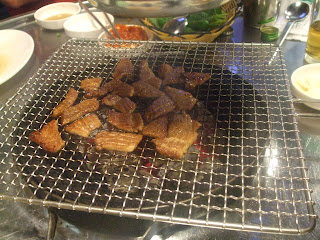 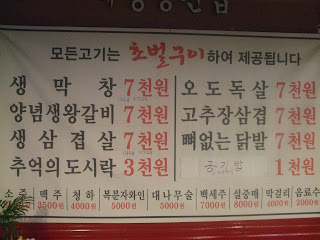 Atmosphere
(Downtown location):   Tables rest on 55-gallon oil drums, which double as depositories for used Soju caps.  I first noticed a thin bottom layer about a year and a half ago.   These days they are nearly full, a testament to the amount of alcohol consumed here.

There are about 16 tables that seat 4 comfortably, with some areas connected for larger parties.  Once we had a party of 15 seated together for a B-day dinner.  Although we were lucky considering it's a popular place that's usually crowded.  Especially around dinner time on weekends, it may be difficult to get a table without waiting.  Only in Daegu, where pig ass originated as a meal, do people line up to eat it.

Locations
Banyawol Makchang is a prolific chain, with dozens of locations around Daegu.  (See map for locations).  (Scroll pages 1-5 under locations list for more!)

The one blogged here was Downtown, just behind 삼덕소방서 (Samduk Fire Station).  It has recently [19/2/2014] been converted into a grilled octopus place.